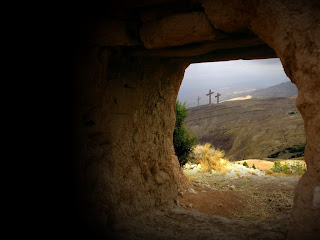 How do I even begin to explain what this weekend means to me, as a Christian? The sermon we had at our church last weekend by Jeff Bucknam puts it best. Unfortunately, to type it all out would be quite long. I'll try to summarize as best as I can.

Jeff talked about what the Resurrection means to Christianity and to Christians. First, he said that the resurrection means EVERYTHING to Christianity and then he gave some amazing facts. He told us to pretend that we are a jury and we are to decide after he's given us the facts whether or not Jesus rising from the dead ever happened. Things like:
1) a man named Jesus actually lived (there's more evidence that Jesus lived than Caesar Augustus)
2) the tomb was empty 3 days after Jesus' death and the body was never found
3) people claimed to have seen Jesus alive after His death (none of these people EVER changed their stories - even after being threatened with death and some of them were killed because of it). There were many other things that I had never heard before and I had never thought to investigate because of what I will sometimes call my blind faith. Very compelling things that I don't know how anyone could argue against.
After Jeff gave us the facts, he told us the theories that have come about to try to explain Jesus' body being gone.
1) The Swoon Theory - Jesus didn't die, he just fainted (Roman soldiers had been doing this for years and were threatened with death themselves if a criminal didn't die, so you'd think they'd make pretty sure about that).
2) The Conspiracy Theory - The disciples stole His body and made up the story (again, none of them ever changed their stories and usually people only do something like that to gain something from it and they definitely didn't gain anything by it).
3) The Hallucination Theory - the disciples were so sad that they wanted Jesus to be alive so they started hallucinating (hallucinations are usually private and 500 people don't "see" the same thing at the same time as well as hallucinations usually only happen once unless you are insane, but many people saw him over and over, plus there's still no body in the tomb).
4) The Myth Theory - the story grew over time (myths are quite general, but the Bible is very specific - Jeff also had some amazing time lines compared to other historical documentation to back this up).
Pretty much what Jeff said at the end is that if you can disprove the Resurrection, you can disprove Christianity. He talked about a man named Antony Flew who was in a debate with a Christian (being an atheist at the time) and every point the Christian would make, Antony would say, "You're right. You're right." The Christian said to him afterwards, "What happened? That wasn't a debate," to which Antony said, "Because I think I believe everything you said." He's now written a book called There Is a God (How the World's Most Notorious Atheist Changed His Mind). Our whole reason behind Christianity is the Resurrection. If there was no Resurrection, there is no hope. If there was no Resurrection, there is nothing after death, but if you go where the evidence leads, Jesus DID rise from the dead.
Of course Jeff puts this all way more eloquently than I ever could, so if you want to hear his whole sermon, click here.
This first part was all very important and directed at your mind, but then Jeff said, "Now let me talk to your heart for awhile." He then said that the Resurrection also means EVERYTHING to Christians. He said that because Jesus rose from the dead, one day so will I! That is VERY exciting and the whole reason to be a Christian is to one day live in Heaven with Him. Death is NOT the end! As a Christian, if I really believe that:
1) it would make me a pretty dangerous person because death cannot hold me. Life should not scare me because that's not all there is for me. Jeff says an amazing quote by N.T. Wright at the end of his sermon that you'll have to go listen to his sermon if you want to hear (sorry, I'm not trying to dupe you, but it's a really long quote). It talks about us as Christians being Easter people and that death has no hold over us.
2) it would change the way I see my present circumstances. How I live now is completely dependant on my belief in the future. There's a story from the 1700s of a man who was going to inherit a million dollars (which of course in that day and age would be about 10 million dollars now). On his way to pick up that inheritance, his carriage broke down. He had just been travelling with a smile on his face thinking about this inheritance and when he got out and saw that the wheel was broken and he would have to walk the last 5 miles into town, he cursed the heavens. The whole walk into town he complained, "My carriage is broken. My carriage is broken." A man mad at God and angry about his suffering is like a man on his way to the city to collect his inheritance while muttering, "My carriage is broken. My carriage is broken." Wow! What an amazing analogy. I DO NOT want to be that complainer. Yes, I'm still single at 35 and yes, I've been having troubles at my job lately and maybe someone cut me off in traffic yesterday, but you know what? I have an amazing inheritance waiting for me that FAR outweighs anything that can happen to me on earth. Why do I have this amazing inheritance? Because Jesus DIED for my sins and HE ROSE AGAIN to go and prepare a place for ME in Heaven. ME! Little old me. Now that's love and that's the God I believe in.

Well said! I needed to hear that again, thanks Fion!

The Christians are getting hammered.

Having to defend stories of the resurrected Jesus travelling into the sky, until clouds hid him from view, is really difficult now that we have space travel, and know what is really in the sky (clue - it is not Heaven)

Back then, of course, people didn't know any better, so would happily write stories of holy men ascending into the sky.

Hi Steven, Thank you for leaving a comment on my blog. I understand that there are people out there who do not agree with my beliefs. I do not consider myself an expert nor a debater, but I welcome you to read my blog. I believe 100% that Jesus died for my sins and rose again and one day I will live in eternity with Him in Heaven (which I don't believe is something we can see in the sky). Like I said, I'm not an expert or a debater, so I've asked my pastor to respond you your comment.

He says: Steven's objections are understandable, but largely unfounded. I live in the same world that he does and in that world people don’t come back from the dead very often. In fact, I have never seen anyone do it or do most of the other miracles that Jesus did. So, I understand why it is hard to believe that Jesus did the things the Bible claims he did (like ascending into the sky or rising bodily from the grave or calming storms).

But, the evidence is overwhelming that the resurrection did happen. I think anyone who honestly looks at the historical case won’t conclude otherwise. The reason that most people do not believe it is because they presuppose that miracles can’t happen and therefore the resurrection can’t happen. But, to claim that miracles don’t happen is simply a faith assumption. The person who says that miracles can’t happen has very little proof for that claim, but instead is assuming that the world is one where the common laws of nature cannot be altered. That claim is as much a faith assumption as any religious claim I know. My question for your commentator is why does he believe that miracles can’t happen? Is it merely that he hasn’t experienced them? Why does he think that people from Biblical times “didn’t know any better” about these things, but we do? Isn’t this a pretty arrogant claim – that our modern society is so much smarter and better than the societies of Biblical times? What makes you think that we “know better”?

My point is simply this: In order to disbelieve in the resurrection, you have to provide a coherent story of how everything happened in order to account for the empty tomb, the claims that Jesus was seen, and the rise of the Christian Church. I don’t think anyone can provide such an explanation so they rely simply on their presupposition that says “miracles don’t happen, therefore the resurrection didn’t happen.” But, this is simply a faith assumption with very little grounding in fact.

Anyway, if you would like to read more about this issue, I can recommend a few great books. One of my favorites is The Reason for God by Tim Keller or The Case for Christ by Lee Strobel.