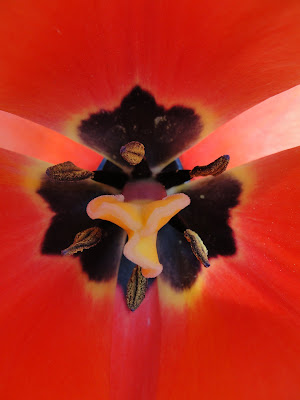 I'm back! Lent was good, but boy, did I miss you all. There's SO much to catch up on. I know the Olympics seem like a distant memory, but I still want to blog about it for posterity's sake.

We went downtown on a beautiful Saturday and our first stop was Robs.on Square. Unfortunately, the line ups were up to 9 hours long for the zip line, so I had to settle for taking pictures of it. 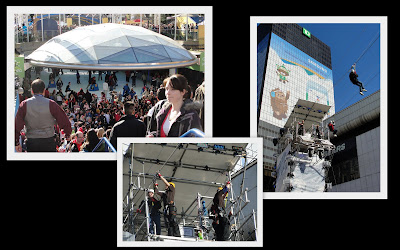 Even the dogs got into the Olympic spirit! 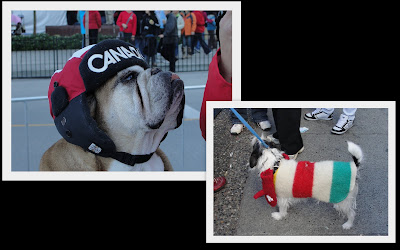 Most of Robs.on Street was shut down to traffic and we stopped to watch Mike Killeen and Coleen Christie setting up for their broadcast. 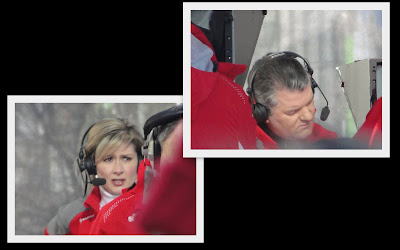 As we hit Thur.low Street, I looked right and saw the Cauldron off in the distance. Of course we had to go see that so... 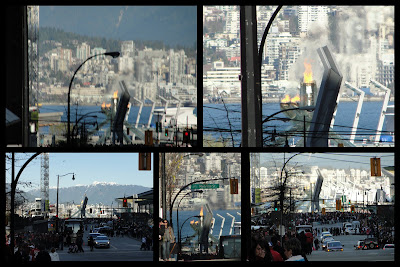 We got a bit closer. It was very cool to see it ... although (and I don't mean to be negative, just voicing my opinion) it did look a bit like a tin foil large science project. But like I said, it was still cool to see it. 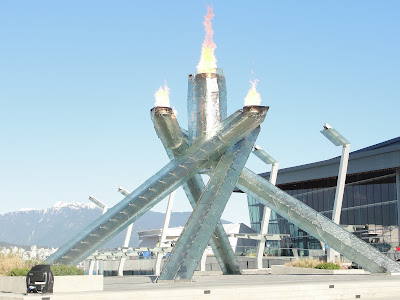 I don't know if you've been watching Ellen lately, but she's trying to "Dominate the World in 2010" and wants people around the world to help her. You're supposed to go to her website and download her picture and take it with you to places around the world. What better spot than the Olympics ... here she is at the Cauldron. 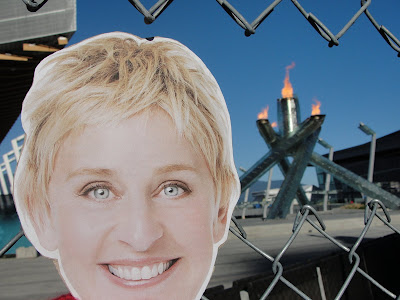 Here's me at the Cauldron and a few closer up pics of the tin foil. ;) 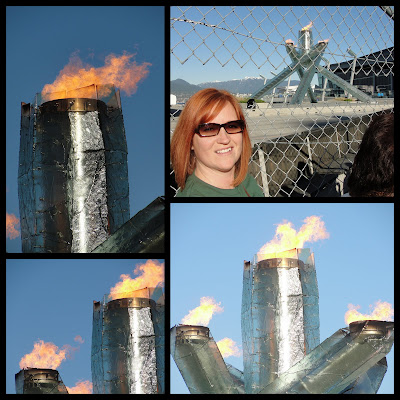 Ellen was being a bit of a diva that day and had to have another picture without the fence in her picture. 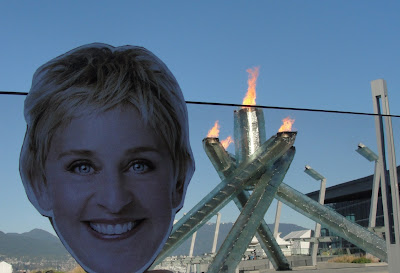 The first line up I decided to stand in was to go up to the viewing point and see the Cauldron from a different angle. The line up only took about 45 minutes and since it was a beautiful day, it wasn't bad at all. 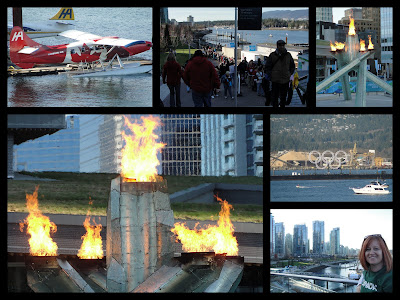 I actually think seeing it from below is better because there's too much going on in the background from this angle. 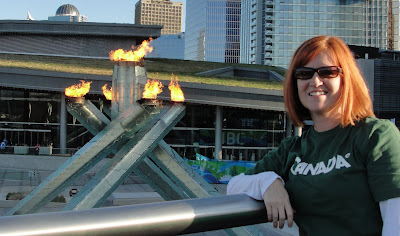 And also from this angle. 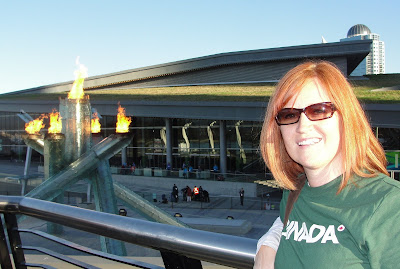 But it was cool to look out at the crowd from up there. 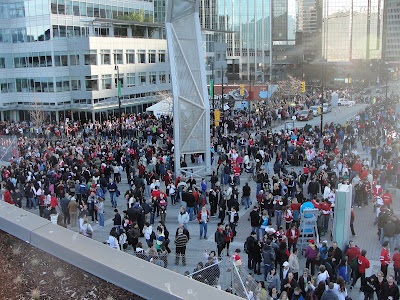 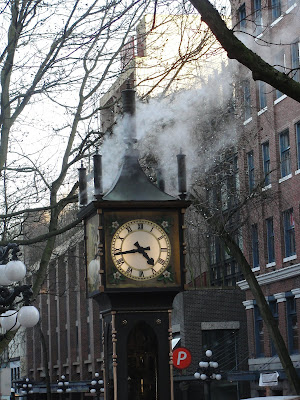 And then my friends went to the Victory Ceremony that they had tickets for and I waited in line for an hour at Live City at Yale.town to see Sam Rob.erts. A French girl opened first along with Kardin.al Offi.cial and Jay Malin.owski (lead singer from Bedou.in Soundc.lash). 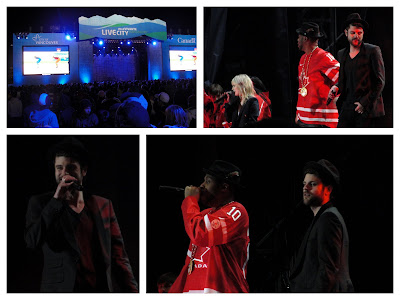 Then came Sam Rob.erts. Flying solo at this point actually worked well for me because I walked right up to the front row and had a great spot for the show (yes, that's the same front row where just a week earlier the barrier collapsed while Alex.isonfire performed and a bunch of people were injured - the crowd was very calm when I was there and I wasn't in any danger of being trampled). 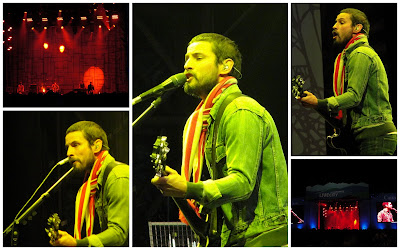 After the concert I walked back along Granvi.lle Street (which was also mostly shut down to traffic) and the energy was crazy! Lots of people out having fun. 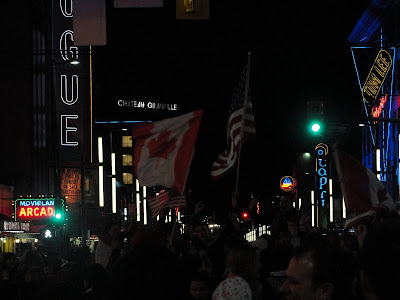 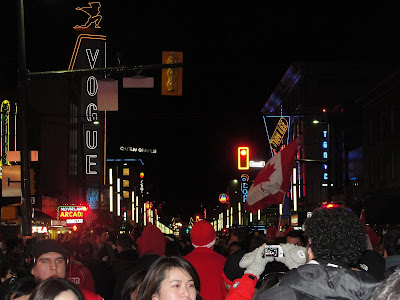 I met back up with my friends and there were some new people who had joined them who hadn't seen the Cauldron yet, so we walked back down there (are you sensing a theme here with all the walking ... yes, there was a LOT of it). 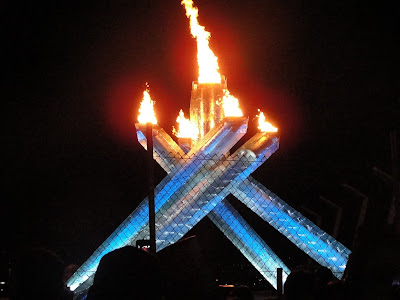 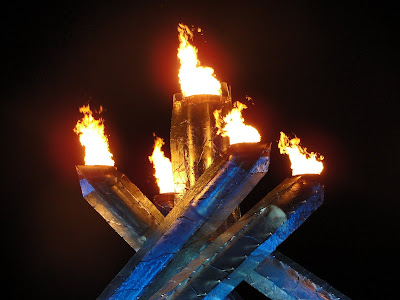 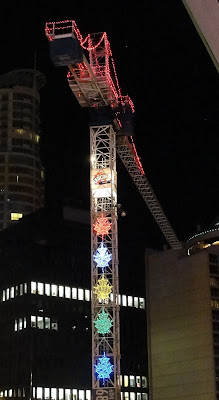 These were the Olymp.ic rings out in the water with Seymo.ur Mtn, I believe, in the background. Whenever Canada won a gold medal, these rings turned gold. 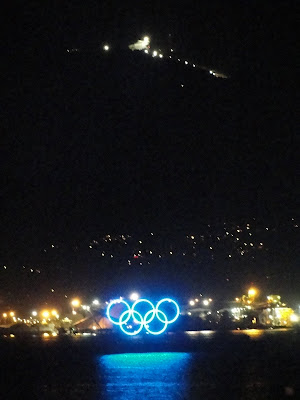 We had a lot of fun that day and I was SUPER exhausted by the end of it but it was totally worth it. Go Canada Go!