One of the first weekends after I got home from Malaysia, Bren asked if I wanted to hitch a ride with a class from her school that was going over to Victoria. I hadn't been to Victoria since High School (you don't need to know how long ago that was), so I said, "Yeah, let's go." It was a bit on the chilly side ... ok, a LOT on the chilly side and a little drizzly as well, but the scenery was still beautiful.
Here are our beautiful Parliament buildings and The Empress Hotel. 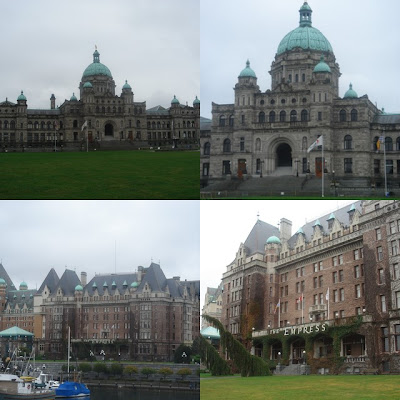 More from The Empress Hotel. Tea, anyone? 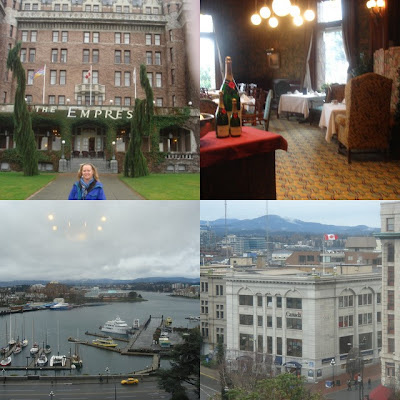 View from The Empress and possibly a building I could work in if I moved to Victoria. All in all it was a nice day, however, we did say we have to go back when the weather's a little more agreeable.
FEBRUARY
We started February off with a bang! Snow! Now, I know snow in February doesn't sound so out of the norm, but for us British Columbians it is ... or at least it used to be. I thought this was odd, but I didn't know what we were in for. We ended up having snow in April as well - UNHEARD OF! Still, "It really was quite pretty," I say begrudgingly. 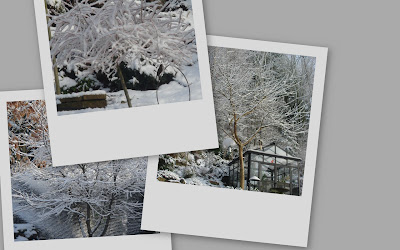 Also in early February my friends dog had puppies! I don't know how well you know me, but I LOVE puppies! Aren't they adorable? They looked like little sausages. hee hee They were so small. They didn't even have their eyes open at this point. Too cute! 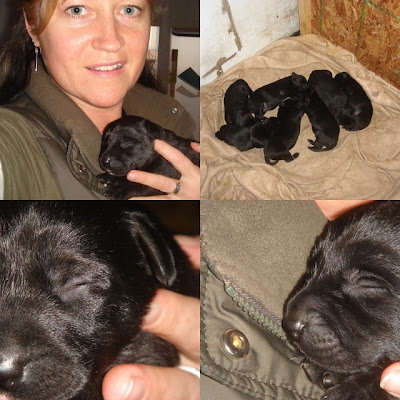 Mid-February I won tickets to go see Mika in concert. Who's Mika, you ask? A lot of people asked me that, but you would know his songs if you heard them. I did take lots of video as well, however, it would take up too much space to post them here. If you have Facebook access, I posted them there. I knew Mika was an odd character so I wasn't sure if his concert would be weird-odd or weird-fun. It was definitely weird-fun. He had SO much energy and his stage was decorated like a circus. It had an Alice In Wonderland feel to it. Very well worth the price of admission ... oh wait, they were free! :) Bren and I both said we'd definitely go see him again. 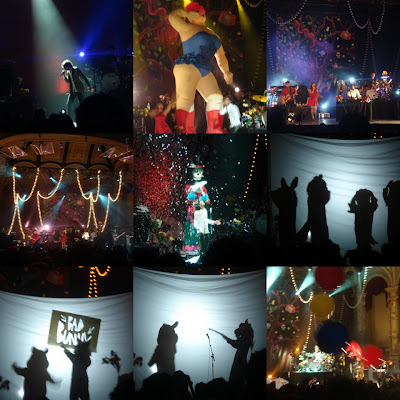 By the end of February there were a few beautiful, sunny (yet still a little chilly) days so we made the most of them and got outside for a walk and I brought my camera along. 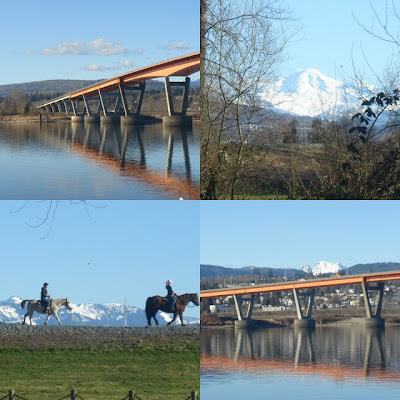 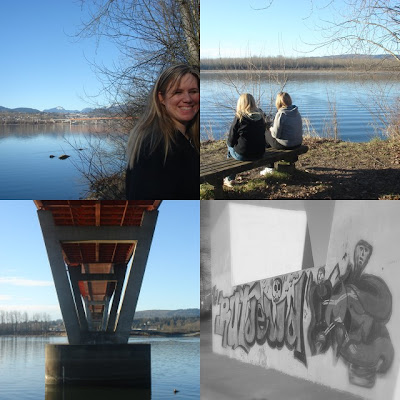 MARCH
Karen and I decided to go see some comedians in early March. Now, going to see comedians can be a crap shoot. Will they be funny? Will they be crude to be funny? Will they dog my religious beliefs? I would have to say "yes" to all 3 of those questions.
Here are 4 of them you might know:
Picture #1 - Mary Lynn Rajskub (she plays Chloe on 24) Didn't know she was a comedian? Most people say the same thing. She started off TERRIBLE! Got a bit better in the middle and ended on a funny note.
Picture #2 - Greg Behrendt (author of He's Just Not That Into You) Sorry the picture's blurry, but it's probably because I was crying I was laughing so hard. He made the night worth going. SOOOO funny! 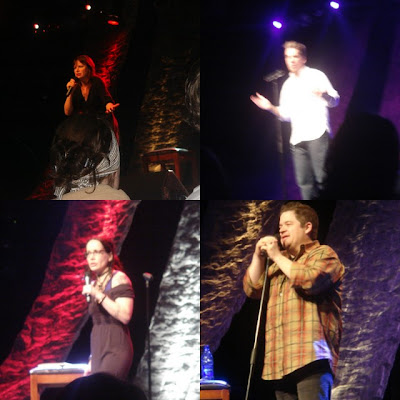 Picture #3 - Janeane Garofalo (she's been in such movies as Reality Bites; The Truth About Cats & Dogs; Mystery Men) She was funny, but a little too political for me. Got a bit boring at times.
Picture #4 - Patton Oswalt (plays Spence on King of Queens and is the voice of Remy in Ratatouille) He was quite funny as well.
All in all a pretty good night. Definitely a few things we didn't need to hear, but we had a fun night out. 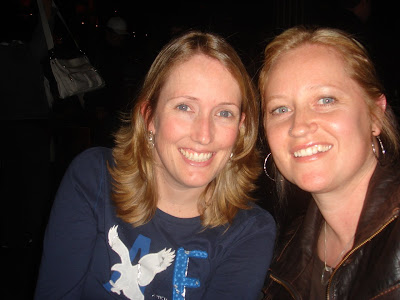 A couple of days later I had to go check on the puppies again. Now their eyes were open. :) 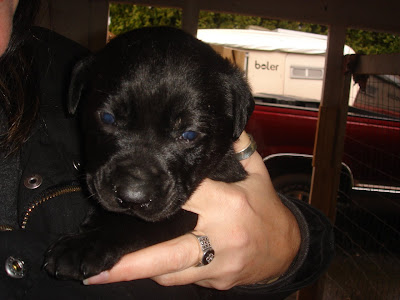 Through Facebook I got a wonderful message from a long time friend named Genny. She had extra tickets to a hockey game and did I want to go? Her treat! Well, of course I said yes. 1) It's always fun to catch up with old friends and 2) A hockey game is always a good time. 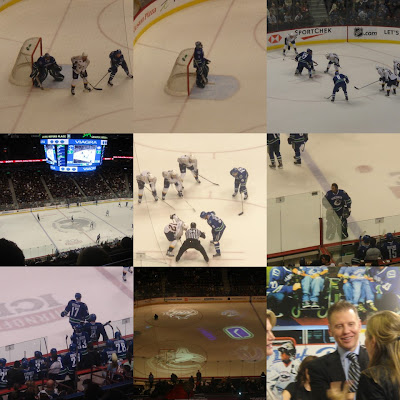 It was so great to catch up with Genny, Shelly and Marilyn. Thanks for a great night out, you guys! Let's do it again soon. 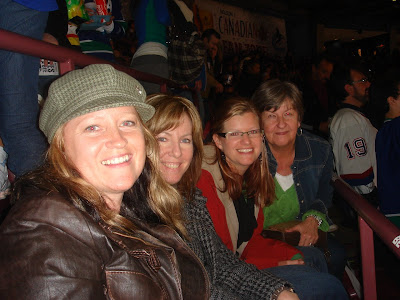 Easter without family around is kind of weird. Every one's getting geared up for their family festivities and I'm ready to settle in with my remote and watch a good movie or something. Not this year. Jennie invited Bren and I over for an Easter egg hunt and Easter dinner. It turned out to be a beautiful day outside so the egg hunt was quite fun. 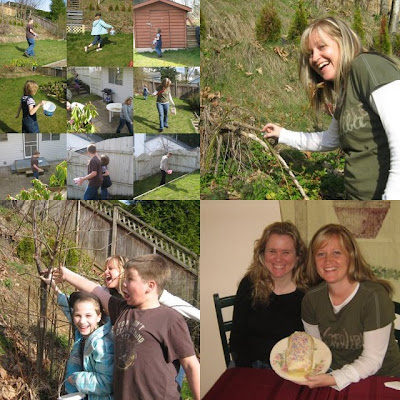 I didn't get any pictures of the scrumptious dinner, but check out the last picture. Jennie knows how much I love paska and since my Mom doesn't live in the same town as me, it's very hard for me to listen to all my Mennonite friends talk about (and put as their status' on Facebook) how wonderful it is to have Paska at this time of year. Jennie also took care of that. She made paska for me and it was her first time ever making it. That was SO special! Thank you Thank you Thank you, Jennie. You are SUCH a great friend for thinking of me when I know you have so much going on in your life already. This was a very special Easter for me.

Again, a few days later, I just had to go check on those puppies again. Now they were all chubby and running around. I could just gobble them up! 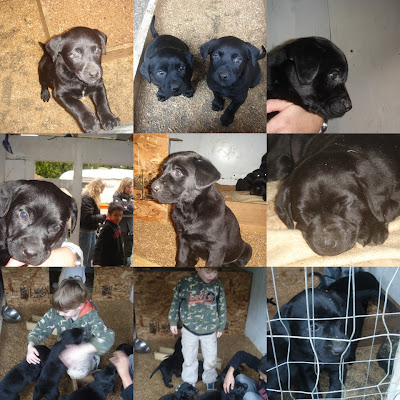 Regrettably, this is my last post of the puppies. Right after this, they started selling like hotcakes. Every time I would come over there would be 1 or 2 less puppies until one day when I drove up I actually watched the 2nd last one get into a car and drive away. That was very sad ... although my friends were pretty happy that they weren't stuck with 8 puppies, so I was happy for them. I sat and played with the last puppy for awhile and a few days later she was gone as well. I guess you have to wait awhile to breed the Mom again, but does anyone know exactly HOW long you have to wait? ha ha
APRIL

April brought a trip up to Sun Peaks to my parents condo. It's a good thing we went when we did because they sold it about a week later. :( I really didn't take advantage of that place enough. I only went up there a few times over the years.
My Dad built the Hearthstone Lodge and he did a pretty good job if I do say so myself. :) 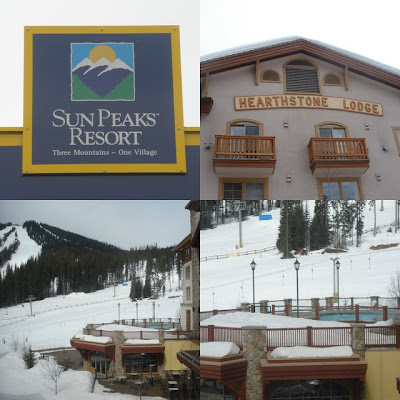 This is the view from our room. We could see the slopes and how many people were on them. Since this was the 2nd last weekend before they closed, the slopes were pretty empty. This last picture above is the pool we tried to get into at The Delta, but they wouldn't let us. :( 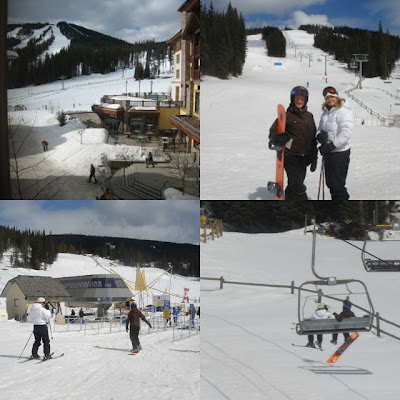 The weather cooperated for the most part and Bren and Karen had a great time skiing/snowboarding.
Since I do neither of those things, I took the chair lift up to the top and just had a look around. Unfortunately, there really was no view from the top so I waited for Bren and Karen to come meet me and then I headed down again. 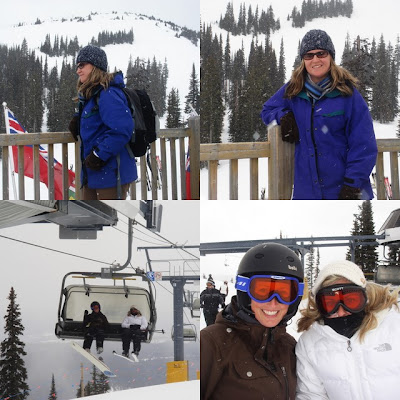 The little guy in this picture below was TWO YEARS OLD!!! Isn't that cool? The guy can barely walk and here he is skiing. I love it! When we asked his Dad how old he was, he said he gets asked that a million times a day. I bet! It's just so cute you can't help but ask. The rest of the pics are the view of the village on the way down the lift. 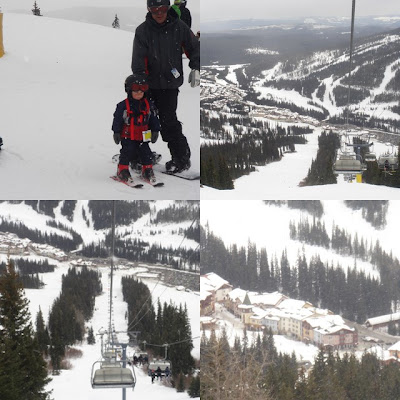 I really wanted to go snow shoeing, so the girls went with me. It wasn't as hard as I thought it was going to be, but the snow was pretty compact, so maybe it would be harder in deeper snow. 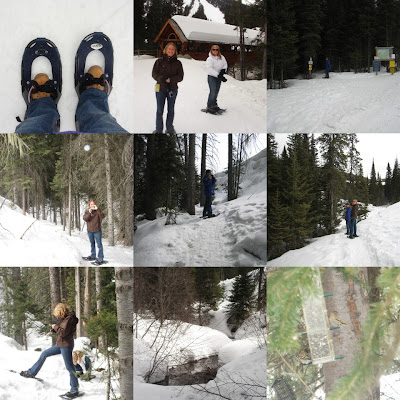 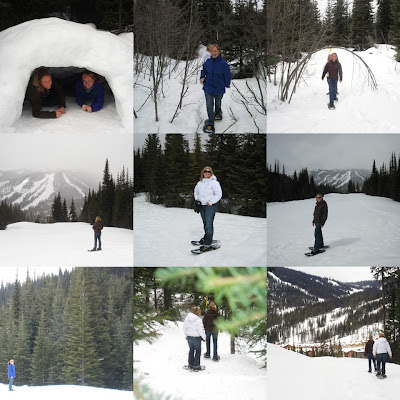 We were gone for about 2 hours and we were happy to see the village in the distance when we came around this last corner. :) 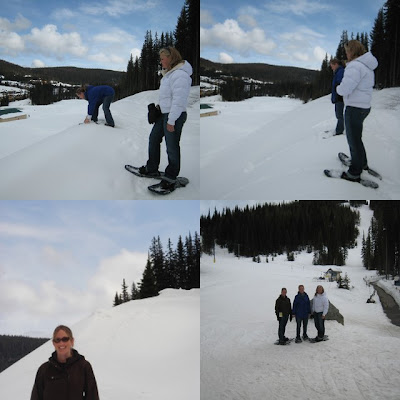 A fun time away!
Most recently in April my sister, Jodi, came to visit. She had a lot on her plate while she was here, so we only got to hang out for 48 hours, but it was worth it to see her to chat, hang out and have some good laughs.
Picture #1 - Jode LOVES her some Starbucks! 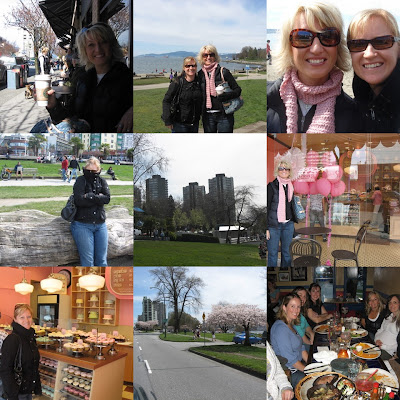 Pictures #6 & 7 - I don't know if you've seen this cute little store on Denman, but it's called Cupcakes. It's very girly and pink and that describes my sister, so we had to take some pictures. We didn't actually end up buying one .. I don't really know why. Hmm, silly of us.
Picture #8 - Cherry blossoms. So pretty!
Picture #9 - We met up with my friends at Las Margaritas to celebrate Bren and Natasha's birthdays. I just realized that this picture cuts Natasha off, so I'm going to add it again below. That's one thing I don't like about these collages. 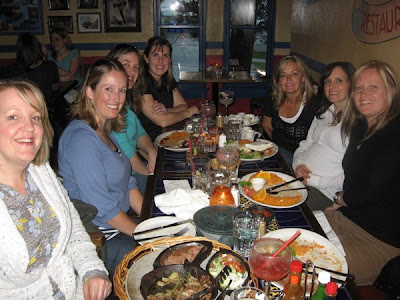 Now I'm pretty much caught up. Again, sorry for not being more frequent, but I've been more of a nomad then usual and have finally moved into another house sitting place. This time I'm here for at least 6 months, so I'll be able to set up camp more often and will feel more settled. Hopefully that'll get me back on track with my blogging ... that is ... if I still have any readers.
Posted by Fiona at 6:09 PM

Great re cap Fion. Nice to get caught up. Great pictures.Glad that I am actually a part of your life and made the blog. You have great friends too. I crave that Mexican food. I can smell the puppy breath. I got to enjoy Bailey's new Axel. Very cute big puppy. Love ya girl.
Jodi

What a fun post! I loved every bit of it!
I have to say that I am very surprised you don't ski or snowboard! You should give it a try! I bet you would be good at it :)

I am a faithful reader too. I am so glad I can see you face to face for a little while. Love you friend.

of course you'll have readers@ Don't even think about giving it up!

Awesome update! You sure do lots of fun things!

I'm still here too checking in to see what's new! Glad to see your doing well! Stop in again soon if you can squeeze us in. I think it's about time for another one of those roast beefs don't you???

Thanks Jode. It was great to hang out with you.

Keri - I should say that I've skied once in my life (in Saskatchewan ... does that count?) and I've snowboarded 3 times. In school when all my friends went on the class ski trips, I never went (more into basketball). I never got good at it and it was quite a bit more expensive then basketball, so I just never got into it. Now I have a bad knee, so I'm a bit fearful.

Lori - YES PLEASE! I'd love to come over again for a roast. Bren told me the other day that I have to get over to your place before Allen leaves because he's just so funny and cute. :) Call me!

I am pooped! What a great read, I won't even ask you how long it took to upload all the pictures :)