It seemed like I was on a roll there for awhile and then I left the planet for a bit. Sorry about that. I was actually quite busy and when I finally did have some downtime, I wanted to just sit on my couch and catch up on shows I'd PVR'd (that would be DVR'd for my American readers ... hopefully that's not Lost in Translation ... ooooh, there's a GREAT old movie I could review for Movie Monday ... but that's for another time). Anyway, here are a few of the events I was busy with over the past couple of weeks. Sonya's quick visit. When Sonya told me she was coming down to Abby, I asked if I could get some girls together to see her. She was all about that, so here we are reunited at Earl's. 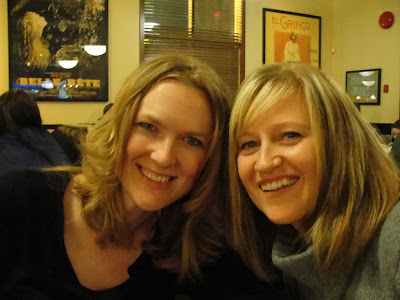 The lovely Kori and Jill joined us as well ... 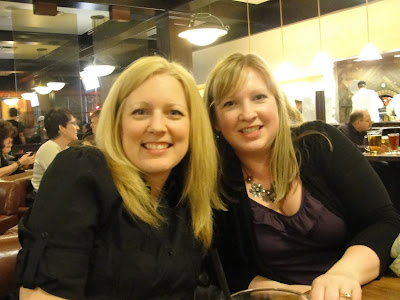 And Rachel was also there. Apparently I didn't get the "wear black" memo. :P We had fun chit chatting and jumping every time my phone rang because, I don't know if you noticed, but Jennie was absent from this night (so was Keri, who was on her way to Palm Springs ... whatever. Who chooses Palm Springs over girlfriends? haha - JKJK!). Jennie was supposed to come, however, she was having contractions that night and they were 6 minutes apart and some of them were so bad that she could hardly breathe through them. We all thought, "Tonight's the night!" but alas, it wasn't to be. What was to be turned out to be something different all together. 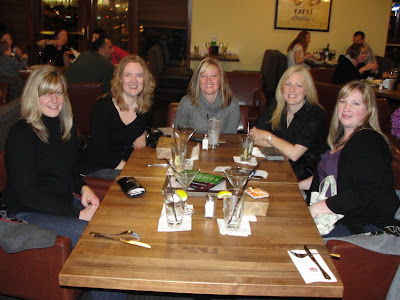 Unfortunately, I ended the night quite abruptly. I've been having a few stomach aches over the last month after I've eaten a meal, but I was just attributing it from going to strictly Jenny Craig food (high in fibre and soy) to a "normal" diet again. Well, I got my regular stomach ache and I joked that I should tell Jennie, "Oh, I totally know how you feel about your contractions. My stomach hurts, too." haha We all had a good laugh, until all of a sudden I had stabbing pains just below my chesticles (as Len from Dancing with the Stars calls them). I excused myself from the table and went to the bathroom for so long that one of the girls was about to come and check on me just as I was coming back. Don't worry, I won't get too graphic on you here, but let's just say that I was lucky I made it home in time before my quesadillas decided to make a reappearance. So, you know after you puke you usually feel better. Nope. Not this time. The stabbing pain continued for another 10 minutes or so and then it was like someone flipped a switch and the pain was gone. Exhibit A - the meal in question 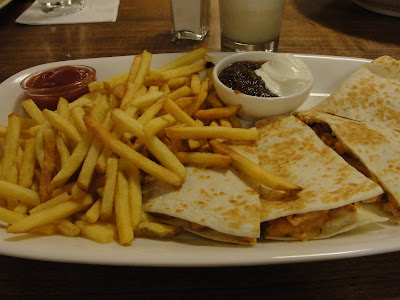 I love my quesadillas at Earl's and have had them many times before. I chalked it up to bad chicken or something. Until the pain came back the next day while I was sitting in the movie theatre. Same story. Excused myself and went home. By this time, people are starting to tell me that my symptoms sound very similar to (insert family member's name here) story of when they had gallbladder attacks. I decided to be my own physician and google it. I could pretty much check off every symptom I found on google. It said it could also have been a problem with my appendix, but when I clicked on that, none of the symptoms matched. Anyway, to make an already long story short, I found out that my Dad, my uncle, my Grandma and 2 of my cousins have had their gallbladders out, so my doctor thinks that's most likely my problem as well. I've now had 4 "attacks" in 2 and a half weeks but of course, unless you go into emergency, I can't get an ultrasound until April 27. Crappy thing is, if they find something, I leave on my trip a week later. Oh well. I know it's all in God's hands and will work out how it's supposed to. But there's my update on that.
The next weekend I went out with my cousins for a little stagette/shower for my cousin Taraleigh. I got to go to her dress fitting as well, but none of those pictures can be shown here ... gotta keep that beautiful dress a secret! Janelle and I planned to take Taraleigh downtown and keep her in the dark as to what we were doing. We left just before supper so I made this cheese plate to take along with us to eat on the drive in. 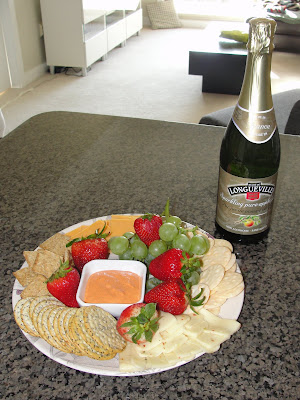 We saw this street performer downtown (who looks strangely like Mr. Tumnus) and we told Taraleigh that as part of her stagette, she had to go stand with him and have her picture taken with him ... as you can see from the picture, she didn't comply. haha We weren't into that kind of stagette. 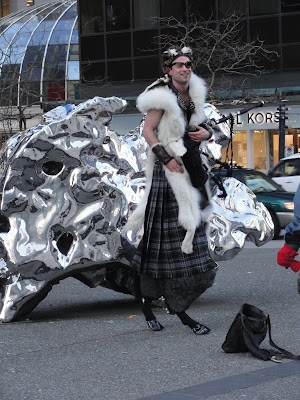 We were, however, into chocolate. After walking around and window shopping for a short while (we didn't realize the stores we wanted to go into closed so blinkin' early!), we headed to our reservation at The Sutton Place for the Chocolate Buffet. 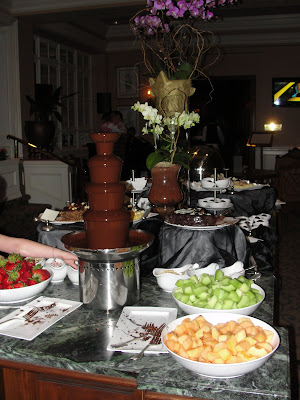 Yes, I said Chocolate Buffet. It was pretty darn good. I would definitely recommend it, but I will warn you, it's not cheap. You definitely pay for the atmosphere as well, though. It feels very posh with the pianist in the background (he was really quite good), the fancy table settings and decor and of course, the company. 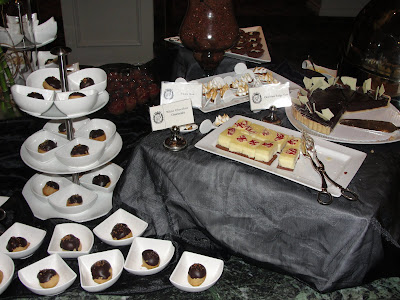 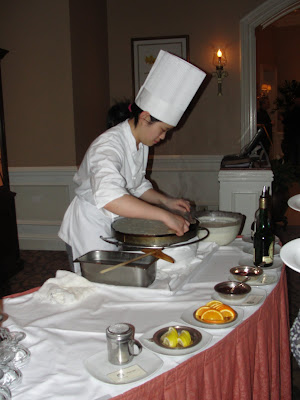 Here's plate #1. Yes, I was a little nervous after what had happened at Earl's the week before, but I chanced it and all was ok. 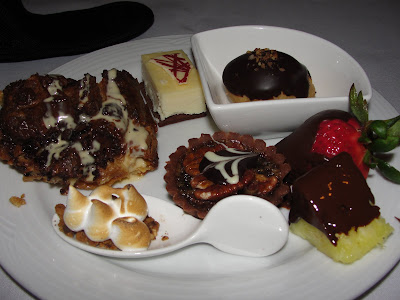 Here's the happy bride. Janelle and I were wondering if she was going to want to kill us for filling her up with chocolate a month before her wedding ... but then we thought, "It's a month before the wedding! She'll have lots of time to work off the chocolate!" haha Luckily Taraleigh agreed with us and wasn't mad at all. :) 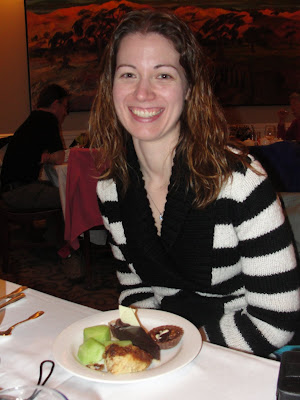 Plate # 2 - I had to go back for a crepe! Good think I only see my Jenny Craig consultant once a month now! I conveniently forgot to tell her about this when I saw her. ;) 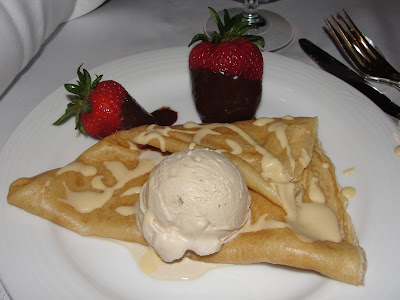 She looks a little nervous opening this bag in the middle of the restaurant, doesn't she ... or maybe she looks excited ... I can't really tell. 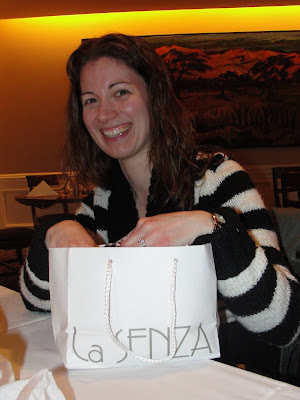 And THIS is what you get when you ask someone else to take a picture for you. I didn't think that I had to specify to focus on US and not the huge painting on the wall behind us. Funny. I didn't crop it because it's actually kinda funny. 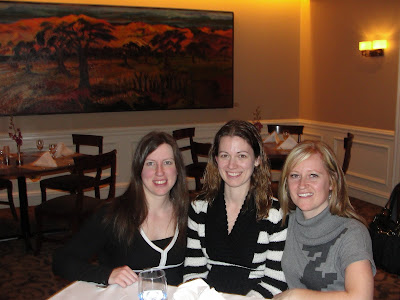 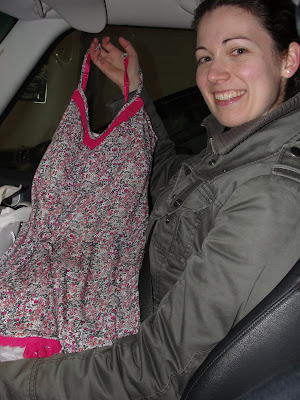 And the last "big" event that I planned was a mini Bornefest. My cousin Brenda was coming out to visit from Manitoba so I sent all the Bornes that are in the area an email letting them know when and where to meet and they ALL showed up! It was great! There were 19 of us in total and we had so much fun. 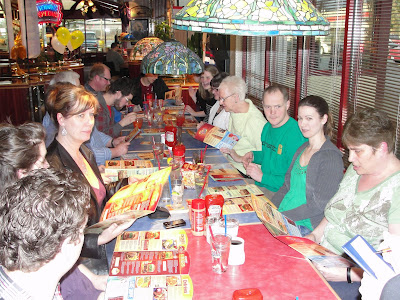 There were 6 of us cousin there representing 6 different families (out of 10). Usually we have a bunch of siblings in the group when we get together like this, but this time it was different. We have: back row - Taraleigh (Art), Edee (Vern), Janelle (John) and front row: Brenda (Henry), me (Herman) and Gord (George). 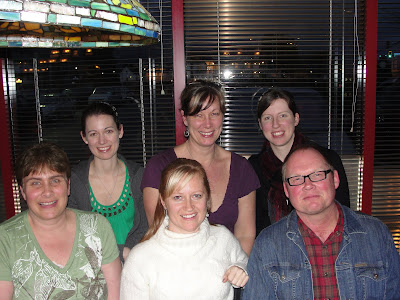 So, those are just a few of the reasons why I was busy over the last weeks. There were a bunch of coffee nights with individual friends where we were chatting so much that I didn't take any pictures and then nights out with my Little Sister and so on. The biggest event that happened in the last few weeks will have to wait for it's own post. SOOOOOO much to tell from that amazing day. My schedule has cleared up now so hopefully I'll be able to post about it soon.
Posted by Fiona at 8:20 AM