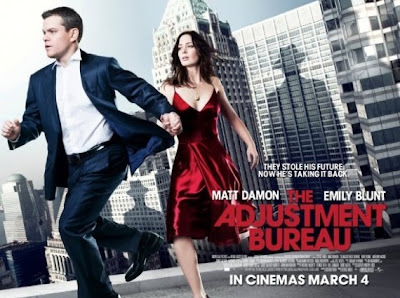 On the brink of winning a seat in the U.S. Senate, ambitious politician David Norris meets beautiful contemporary ballet dancer Elise Sellas--a woman like none he's ever known. But just as he realizes he's falling for her, mysterious men conspire to keep the two apart. David learns he is up against the agents of Fate itself--the men of The Adjustment Bureau--who will do everything in their considerable power to prevent David and Elise from being together.

But why? Why don't they want them to be together? And when you find out why, is that a good enough reason? This movie seems to make you want to ask yourself if we control our destiny or do unforeseen "forces" manipulate us.

Before I say anything more, I will tell you that I liked the movie. It's definitely more romantically inclined and less action than they lead you to believe in the trailer, but I did like it. I don't want to give anything away or taint your thoughts before seeing it, but this movie could really mess with your mind. If you're unsure of what you believe and who you believe in, I can see that this movie would bring about a lot of questions, which it did for me at first. On my drive home my mind was going a mile a minute and I started questioning God ... and then the verse I opened with popped into my mind.

Oh yeah. I don't NEED to know what's going on because God's got it under control. I will NEVER be fully in "the know" and that's ok because that's what faith is. And besides ...

"For I know the plans I have for you," declares the LORD, "plans to prosper you
and not to harm you, plans to give you hope and a future." (Jeremiah 29:11)

I went and saw the movie with a co-worker and she obviously had some thoughts about the movie as well because as soon as she walked through the door the next morning, before she even took her coat off or turned her computer on, we were talking about faith, God and free will. It was pretty cool. I don't know if we came to any hard conclusions, but I told her about the 2 verses that I've mentioned here and that I don't worry because I really do believe that God's got it all under control. All I can do is think about today and see how God wants it to play out.

I mentioned that this movie seems to make you want to ask yourself if we control our destiny or do unforeseen "forces" manipulate us. I believe they left out one option. That there's a loving God who allows us to have free will and won't manipulate us but will be there with open arms if we decide to choose Him. No, it doesn't mean that life will be a piece of cake if we do choose Him, but He'll be with us every step of the way to help us through it ... and that's enough for me.
Posted by Fiona at 8:02 AM