It's difficult to understand the sum of a person's life. Some people will tell you it's measured by the one's left behind. Some believe it can be measured in faith. Some say by love. Other folks say life has no meaning at all. Me? I believe that you measure yourself by the people who measured themselves by you. What I can tell you for sure is that by any measure, Edward Cole lived more in his last days on earth than most people manage to wring out of a lifetime. I know that when he died, his eyes were closed and his heart was open. 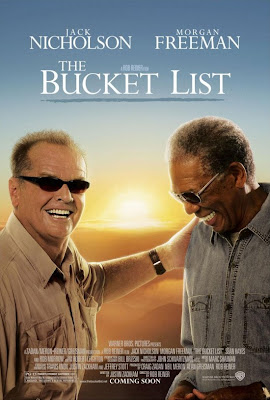 Those are the first words you hear when watching The Bucket List. It intrigued me right off the bat. I wondered, "Is my heart open? What is the sum of my life?" I was really interested to see where this movie went. Sure, there are cheesey parts and it's a shame that they used a green screen in so many scenes instead of actually going to the locations they're supposed to be in the movie (safari in Africa, the pyramids in Egypt, Taj Mahal in India and even something as simple as driving a race car), but I liked the overall idea of the movie.

They both find out they have cancer and have about a year to live, so they make a list of things they'd like to do before kicking the bucket ... hence, The Bucket List. Morgan Freeman's character puts things down like:

Help a complete stranger for the good

Laugh until I cry

Kiss the most beautiful girl in the world

Get a tattoo
Which leads Carter (MF) to say to Edward (JN), "Is that the sum of your ambition? Edward, I've taken baths deeper than you."

I thought that was a pretty good line, however, in my opinion, if you're going to make a bucket list, I think it's ok to have fun things like that on it.

Later on in the movie, when they're sitting at the top of a pyramid (yeah, right!), Carter tells Edward that the ancient Egyptians had a beautiful belief about getting to the entrance to Heaven. When their souls arrived, they were asked two questions and their answers determined whether they were admitted or not.

1) Have you found joy in your life?
2) Has your life brought joy to others?

Wow! Those are 2 awesome questions! Think about them. Read them again. I can honestly say yes to the first question which brings me ... what else? ... JOY! And the answer to question #2? Well, I think we'd all like to answer the way Edward answers by saying, "Ask them."

But be honest with yourself. Has your life brought joy to others? My answer is this ... I believe so. For the most part, I've surrounded myself with people who bring me joy and in turn, they inspire me to do the same. Edward's answer is probably right in that we can't truly answer for someone else. People have to choose joy. I may try to bring people joy, but they have to choose to receive it. I think if you were a grumpy, bitter, curmudgeon and were asked that question, you'd have to answer no, so if you're mostly a pleasant person, why wouldn't your answer be yes? Because it seems arrogant to answer yes? Maybe, but who cares! I do think that we can always strive to be better people, though, so let's not get carried away on being high on ourselves. ;)

This movie, to me, was about three things.

1) Being a good friend

One of the last lines in the movie is this ... "I'm deeply proud that this man found it worth his while to know me." I am so grateful to have so many people in my life worth knowing. You have inspired me, encouraged me, cried with me, served with me, been silent with me, laughed with me and gone on many adventures with me (whether abroad or right in our own backyards). I lost a friend recently and it was very sudden. I hadn't told him what he meant to me and I'll forever be sorry for that. His facebook wall was inundated with amazing comments about what a great person he was. I know that no one's going to say something bad about someone at a time like this, but they could've just said simple things. Instead, they went on and on about his character, his encouraging words and how much he'll be missed. It's really made me want to be a better person. We should all aspire to have those things said about us when we pass away.

2) How do I want to be remembered

This pretty much ties in with what I said at the end of #2. What kind of legacy do you want to leave behind? What do you want people to say about you when you're gone? Then start living it NOW! It's not good enough just to think about it. Do it! And I'm pointing the finger at myself here as well. Just like choosing joy, it's a daily choice to be a nice person when you wake up in the morning. Granted, for some people it's an easier choice than for others (why is that, anyway?), but we really do have a choice.

The other day I saw this quote: "Begin at once to live, and count each separate day as a separate life." - Seneca. Count each day as a separate life. I like that. Some things will definitely be worth the risk and others won't, but at least you'll have put yourself out there and tried. Going back to the beginning of this post, when I die, I want my eyes to be closed and my heart to be open, however, I also want to LIVE with my heart open.

Overall, I'd definitely recommend this movie. Is it JN's or MF's best acting jobs? No. But it's the message that counts and this is a good one.

So, my question for you is: