Here it is. My U2 in Hawaii experience. Just know, this entry could NEVER do it justice, but I'm going to try. We arrived in Honolulu around midnight, got something to eat (because they don't feed you on the plane anymore, did you know that?) and then settled into our mediocre hotel. In the morning, this was our "partial ocean view" as advertised. Not too bad, I thought. 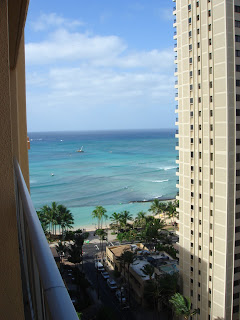 On Friday morning, we had breakfast by the 2 story aquarium in our hotel and watched the 4 stingrays and all the fish swimming around. Then we headed to the beach and vegged for a couple of hours. Around 5:30, we headed out to the stadium to take a look at the situation for the concert the next day. You see, we had General Admission tickets for the floor, so to get as close as possible to the stage, it was first come, first served. I decided I wanted to stay overnight at the stadium. Bren and Dan weren't so on board with that plan. When we got there, we were sent to the wrong side of the stadium. When we figured that out, we started running to the other side. As we passed through a locked gate, we saw 4 SUVs pull up. I saw women and kids in the first 2 SUVs, and my first thought was, "Why do these people get to go in here?" Then, it happened in a flash, but when the last SUV pulled up beside us, we all saw Bono sitting in the passenger seat and we all yelled, "BONO!!!" He didn't stop or even look at us, but we were psyched. That got us pumped. We now think the first few SUVs had the wives and kids in them and the last SUV was the entire band (at least that's the story we're telling ourselves). When we pulled ourselves together and got to the right side of the stadium to line up, we got numbers on our hands. We were numbers 485, 486 and 487 (out of 1200). At about 9:30, they moved us into holding pens, or cells as we called them. Bren and Dan did hang out with me until about 10 pm, then went back to the hotels. Bren was going to try to make it back for the night, but they said they'd only allow us "out" for 2 hours, but by the time she got back to the hotel, her 2 hours was up, so she stayed at the hotel. I don't blame her. I had brought a bright pink floatation "bed" to sleep on and a towel to cover up with. Well, I wasn't expecting the strong winds that we experienced. The port-a-potties were blowing around in the parking lot. About once an hour, the winds would pick up, and I would wake up. Who knew that Hawaii would be cold at night? All in all, it wasn't a terrible night. The only thing I would change would be to have brought a larger towel or maybe even a blanket. Everyone was super friendly and excited about the experience. U2 is totally worth it .. is how we were all feeling. About 6:40 am, I woke up to find Bren sitting beside me and she brought me a wonderful cinnamon bun from McDonald's. Aaaah, food! Don't I look comfortable? 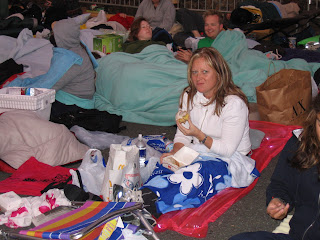 We now had a long day ahead of us waiting for them to let us into the stadium. Around 9:00 am, we made a trip to K-mart to buy some lawn chairs, snacks and a few other things to keep us occupied during the day. Luckily it was a little overcast, so it wasn't nearly as hot as it could have been. To my surprise, I only got a little bit of a burn. Below you will see Cell #1. In Cell #1, we met many cool people. People from LA, Germany, Italy, Edmonton and Winnipeg. All there to party with U2 and Pearl Jam (opening act). 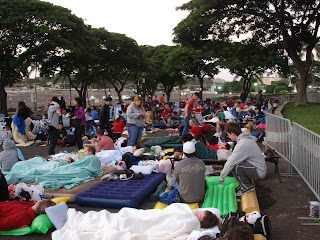 In case you're wondering what happened to all the paraphernalia that everyone brought with them, they told us that whatever we wanted to donate, the Salvation Army would come and pick up, so most people left everything on a pile in the grass. We weren't allowed to take backpacks in with us, so we tried to go in with as little as possible. At around 3:30 pm, they moved us a little bit closer to the stadium, and then at about 5:00, this was my first glimpse of the inside of the stadium and the stage. Thankfully, it was not chaos. 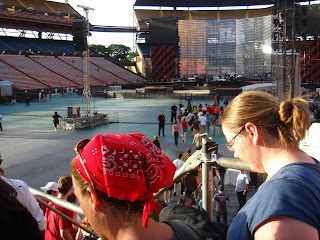 The wait was worth it. We were in the inner circle .. or the elipse, as U2 fans call it. Can you see how close I was? Amazing! So exciting! 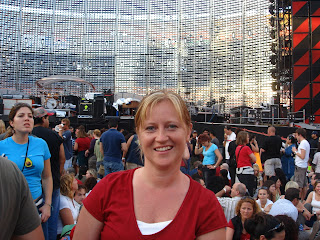 Off each side of the stage shot an arm of another stage. We stood beside the one you can see in the picture below. We knew that Bono spent a lot of his time on this side of the stage (even started the concert here), so we were happy to be there. 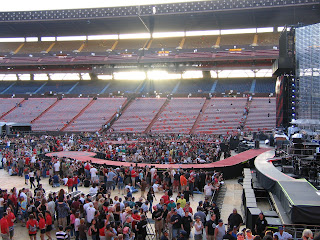 The first opening band was Rocko and The Devils. Rocko is the stage manager for U2. He started at 6:30 and was on for 1/2 an hour. At 7:30, Pearl Jam came on. They put on a great show as well. Can't say I know a lot of Pearl Jam songs, but there were a few, and it was fun. They were on for about an hour. 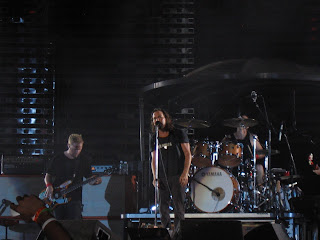 Then, at 9:00 pm, the moment we'd been waiting for. City of Blinding Lights started playing, and we started screaming. Let the show begin. Bono came on stage waving an American flag. This was their last concert of this tour. They'd been on tour for 18 months, and this was concert #131. Not a bad place to end your tour. This is honestly how close we were! 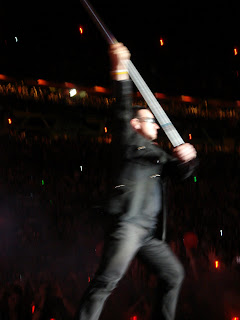 Someone in my house is a little jealous!! He's been to two U2 concerts, I on the other hand have only been to one :(

Hawaii would have been amazing!!
I can't believe how close you were!

WOW!!!!!! That's totally awesome!! I'm SO glad you had a good time/experience while there :) Barb Schellenberg Grad'91 M.E.I.
andnowforsomethingtotallydifferent.blogspot.com

Thanks for your comments and for acknowledging how close we were. Don't know if you could tell, but that was kind of a big deal for me. :) hee hee

What an exciting adventure!!!! You are a very dedicated fan :)

Oh to be young and fancy free. it sounds like a fabulous time. I must admit I've lurked on your blog as well and have enjoyed your posts. I guess I'll have to teach Lori how to make her own delectable morsels so that you have have more than one scrawny bite.

Ok. I can't even tell you how envious I am! And glad you had such a great time - although U2, Hawaii how could anything be bad with that combo!?! Totally amazing and to be so close! I just can't imagine. Something you'll never forget.

Hey Fiona! Looks like a grand time! Did you catch them at the start of the tour when they were in Vancouver? It seems like so long ago but I had a friend who gave me a ticket when he had someone back out. Tough for me.

See ya in blogdom!