Last weekend we were privileged to go up to Lori's sister and brother in law's place up in Whistler. We had a great weekend. Let me take you on a visual journey.

We arrived late on Friday night, went and sat at a pub for a bit (watched the hockey game) and then walked through the village while it lightly rained.

On Saturday morning we woke up to a small snowfall on the ground! We were so excited about the yummy food that Lori was whipping up that we forgot to take a picture of the snow on our cars, but I did manage to get this picture. 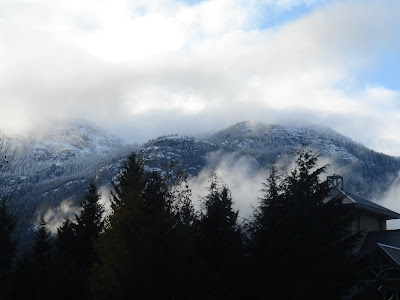 Aaaah, snow covered mountains. Isn't that what Whistler is all about?
After we were full from our scrumptious breakfast, we wandered into the village. It wasn't sunny out, but it wasn't raining, so that made for a very pleasant day. So, we walked ... 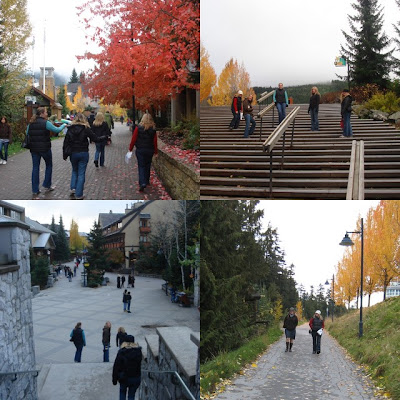 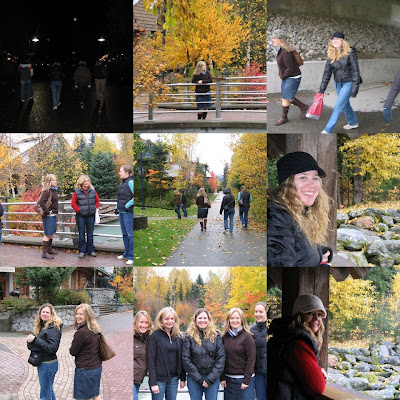 and walked ... and stopped for quite a few photo shoots. 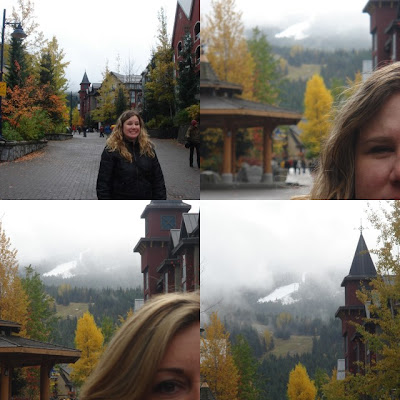 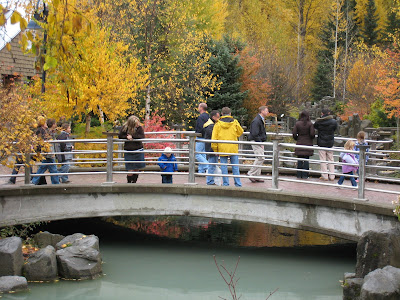 and when we were tired from walking and had built up an appetite again, we ate pizza! 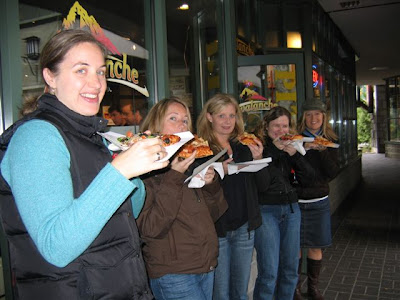 One of the things I love about Whistler is that they allow dogs in the stores. I'm sorry for those of you who have allergies, but I love it. This guy (his name was Marshall) was in the Roots store and we all literally stopped and stared when we saw him because he's so cool looking. I've even had a friend who wasn't there and only saw this picture say the same thing that we all said, "He doesn't look real." It's totally true. If you've ever seen the dog, Barkley, on Sesame Street, that's what he looked like. We thought he was going to look up and start talking to us. He looked like a puppet. Oh so fluffy and cute. 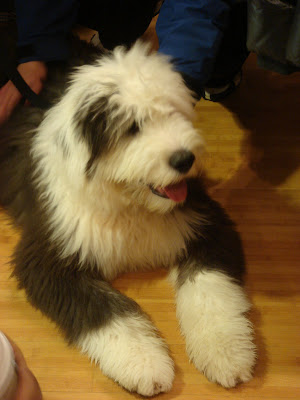 And there there was this guy hanging outside of the Fairmont Chateau Whistler. I think he's their mascot. 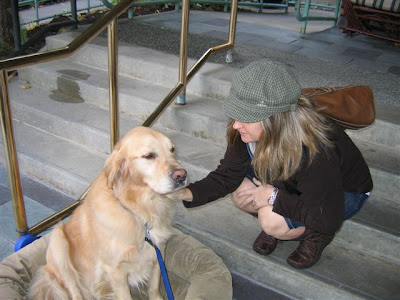 These pictures don't do the foliage justice. The colours were amazing and so great to look at. 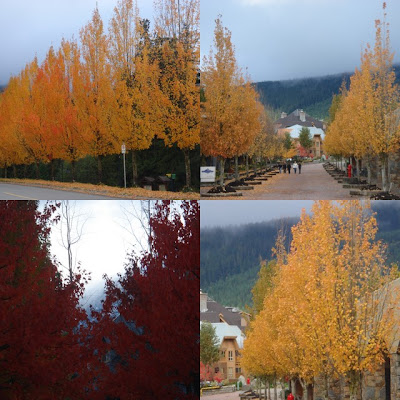 More signs of the fall were the decorations (this was at the Fairmont as well). 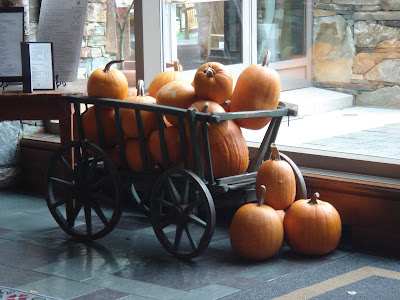 As well as this fun giant chair. Fun girls shot, hey? From left: Carmen, Karen, Lori, Jennie, me and Bren. 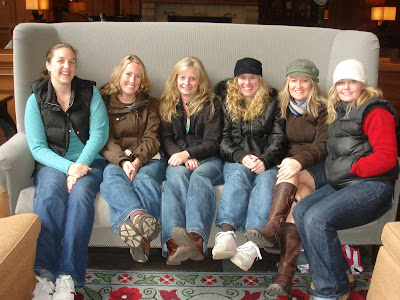 And then we walked some more and had another photo shoot on the bridge. 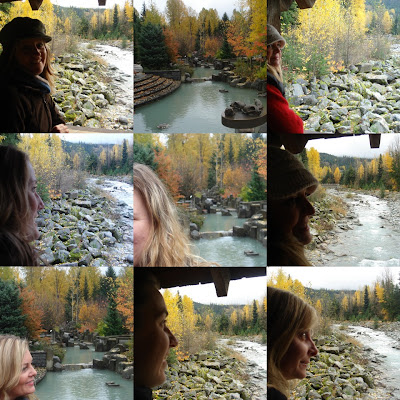 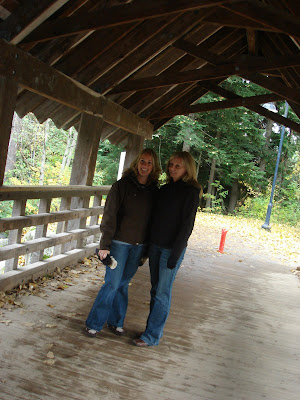 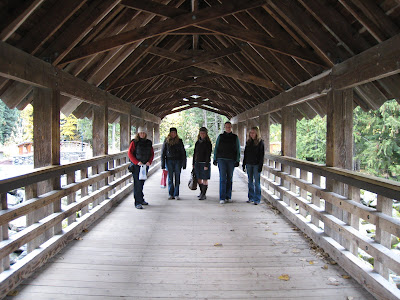 And of course we had to compare shots. 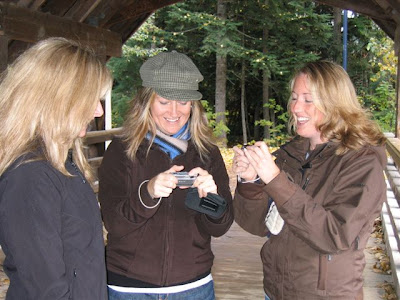 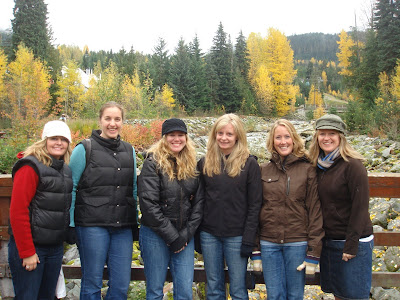 So many photo ops, so little time! Oh wait, we did have time for one more. :) 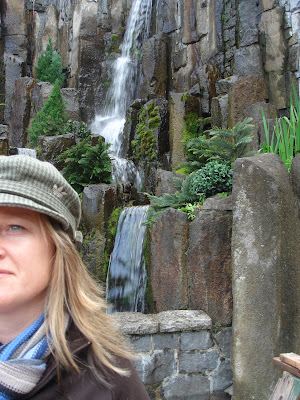 Little close, right? Sorry about that. 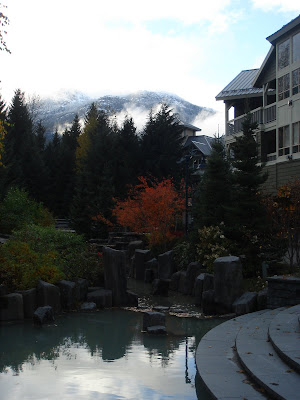 One last shot of the village with the snow capped mountains in the background.

Since we had a late lunch, we went back to the cabin and rested from all the walking (ok, and some shopping). Then we got dolled up again and went out for supper (of which I forgot to take pictures, but we sat outside for the first bit underneath a heater but my hands were still cold so I didn't take my gloves off and therefore forgot about my camera). You'll have to take my word for it .. we looked hot (boys even flirted a little with us .. I KNOW .. crazy and unusual things happen when you leave Abbotsford). :)

After that we went back to the cabin again and played one of my all time favorite games. 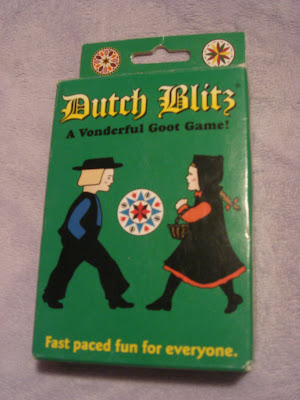 It truly is a Vonderfully Goot Game (oh yeah, and fast paced!). Jennie and I had grown up playing this game and Karen and Lori were the newbies, but they did VERY well. Karen even won one of the games (points up to 100, not just one round). Now that I've wet my whistle again with this game, I hope it comes out more often. I brought my camera down to take a picture of us playing, but then got so wrapped up in the game that I forgot. I wasn't too up on my picture taking that evening ... or just tuckered out from all the photo ops during the day.

Thanks to Lori for organizing the weekend (let's do it again sometime soon ... wink, wink, nudge, nudge) and a very Happy Birthday to Karen whose birthday we celebrated (sort of .. I kind of feel like we wimped out a little, Karen ... sorry about that. We'll get your present to you eventually) while up there a few days before the actual event.

P.S. These next pictures are for Lovella who inspired us to try on a few hats. 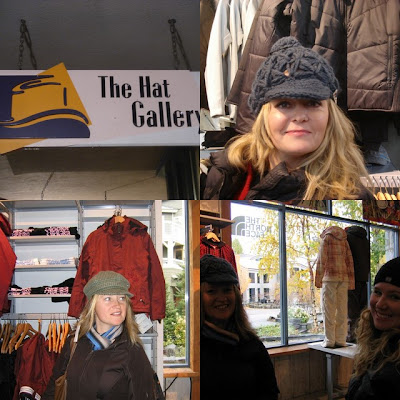 It was so fun that 3 of us decided to make purchases! 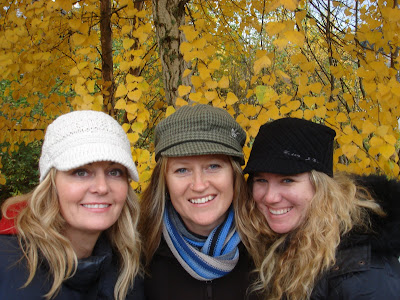 That looks like it was SO fun! I love Whistler and don't get there often enough. Great pics! Love the hats.
You shouldn't be surprised you were flirted with - you are all gorgeous!!

So much fun... gorgeous pics. Whistler is such a great place. I particularly love the hats!

Okay, so fun!!!! You guys look awesome. Lovella will be proud. And look at you in a skirt and boots you hot babe!! Would have been so fun to be there. Looks like maybe March I am heading that way. keep praying. Love you friend. Leana

Your hat makes you look oh-so-much more like your sister. :)

Oh I do love how much fun you girls had. It just looks fantastic. I love it that everyone is into having their picture taken, I love how cute you all look, I love how you enjoy the foliage . .and I really love that you mentioned my name . ..while having fun. And . ..
to boot . .I am proud of you, for not only trying on hats (it is fun isn't it?) but for Buying hats.


thanks for the trip along.