Literally the day after the U2 concert, I headed to the airport and got on a plane for Argentina! These were my first glimpses of the Argentine life I was going to live for the next 2 weeks. 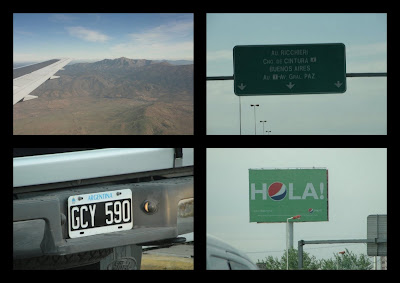 My first surprise was how little English was spoken. I tried to talk to my cab driver and he just gave me a blank stare. Sooooo, that was a 45 minute silent ride to my hotel. Once I got to the hotel, their English was a little better. I went to the room and had a little rest while I waited for Leana to arrive. She was only about 1/2 an hour behind me so I didn't have too long to wait. She knocked on the door and I heard, "Helloooooo." I recognized her voice right away and we had a great reunion. Sat and chatted for awhile and then off into Bue.nos Air.es we went. We literally sat at the restaurant and talked ... then walked around looking for some place to have ice cream ... then sat there and talked some more and then went back to the hotel because I was exhausted.

In the morning, our breakfast we included in our stay, so we went around the corner to the restaurant where our vouchers were to be used and this is what we had for breakfast. 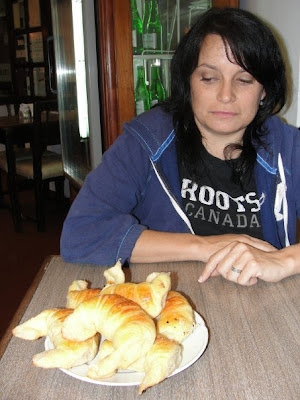 6 croissants, orange juice and Cafe Con Leche (coffee with milk) for Lea. Very yummy.
After breakfast we took our trusty map and headed down the street in search of the Cementerio in La Recoleta. Sometime in the summer, my "1000 places to visit before you die" calendar had this place as one of the places to visit because this is where Av.a Pero.n (Ev.ita) is buried. We walked into the cemetary and it was a HUGE maze. As we searched for her grave, we found these other amazing resting places of apparently very important people. 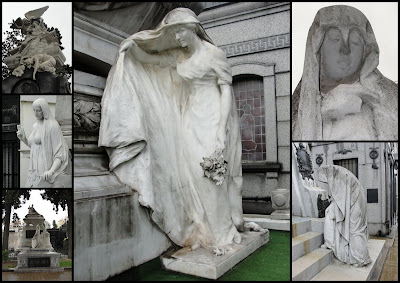 Since these graves were so well adorned, we couldn't image what we would find when we finally found Av.a's grave. We searched and searched (oh, and by this time it had started raining - luckily Lea had thought to bring her umbrella) and even though we had a map of the maze, we had to ask quite a few people. When we finally found it, this is what we saw: 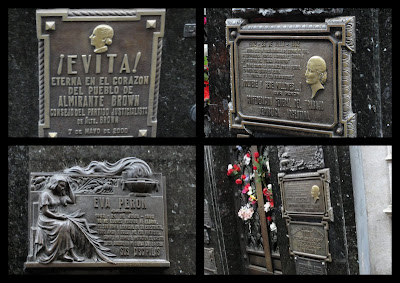 If no one had told me where it was, I would've walked right by it. I was very surprised that for one of the only people I had ever heard of from Argentina (who a movie had been made about), her resting place was nothing as special as all the other ones we had seen. It was a strange feeling walking around this place and we said we definitely wouldn't want to walk around there after dark. 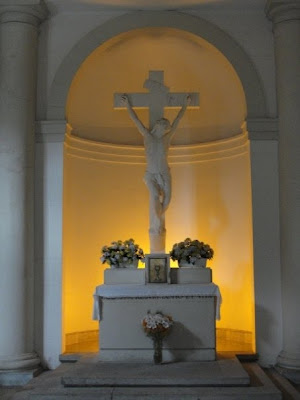 After that tour, we hopped on a bus that was going to take us on a tour of the entire city. As we stopped and picked up more people, the rain picked up as well. At least it was a warm rain. 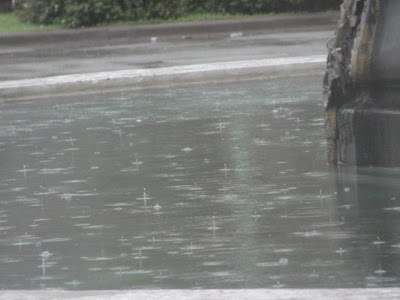 But we didn't let that dampen our spirits. Here we are at La Ca.sa Rosa.da (Spanish for "The Pink House" - the American's have The Wh.ite House and the Argentine's have The Pink House). The balcony we're standing under is where Evi.ta gave many speaches from. The Argentine government even allowed the filming of the famous “Don’t cry for me Argentina” scene in the movie Evi.ta to take place on the actual balcony. I think I'm going to have to rent that one again now that I've been there. 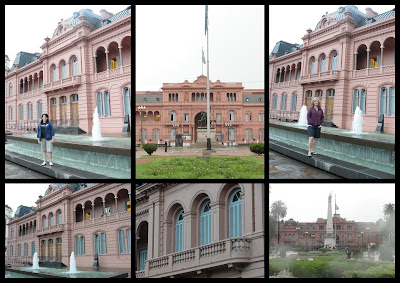 Our next stop (after letting off the old lady who puked in the back of the bus - poor thing) was in the area called La Bo.ca (mouth of the river). The colourful buildings in the pictures below are a street called Camin.ito. The pictures in the bottom right are of the Bo.ca Stadium which is known among sports fans for La Bombonera, the home of Bo.ca Juniors, one of the world's best known football (soccer, to us) clubs. It was raining quite hard at this time so although I did of course manage to do a bit of shopping, we didn't spend too much time here. 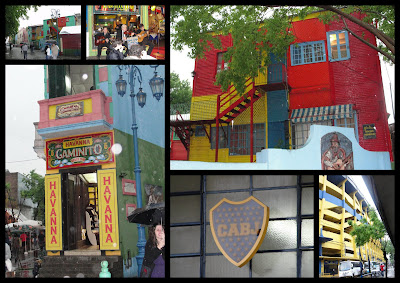 Leana's saying for the day (which ended up being the saying for the whole trip) was, "I think it getting brighter out there," meaning, "I think the rain's letting up." Sometimes she was right, but most of the time it was only a dream. After the tour, our bus dropped us off at a gorgeous mall and Leana got herself some Star.bucks. She was quite happy about that. :) After that we hopped on the subway and headed home.
Just thought I'd show you a couple pictures of our fun hostel. Our power went out that night for about 2 1/2 hours but we just sat in our room with my little reading lamp and chatted and chatted. 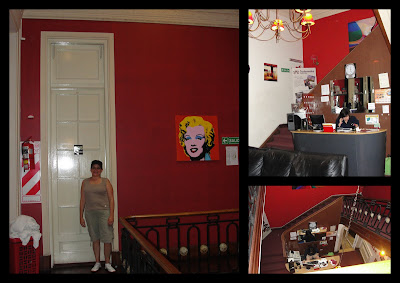 The next day we went walking again (how come walking when you're on vacation is expected and not a bother, but I never do it at home except for purposely trying to get some exercise - not just for getting from point A to point B?). Today we were in search of the market. On our way, we passed by this cute man with his dog and when I stopped to take a picture, a lady passed by and said, (in Spanish) "They are both old and good." SO cute!!! 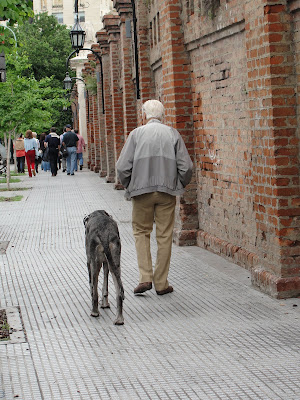 Then, we found ... the market. I don't know if you can see it very well, but in the bottom, middle picture below, the market is along the edge. It was just a bunch of stahls set up with many fun things to look at and of course, to buy. I bought some jewellery here and a great shawl. I bought the shawl from the lady in the picture with me in the bottom right. She was very sweet. I think her name was Carmen, if I remember correctly. 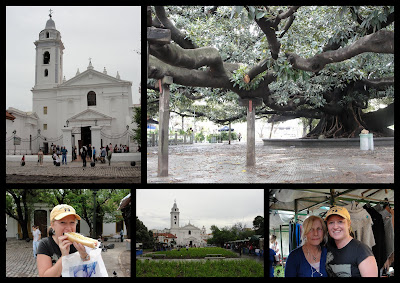 Then we hopped back on the subway (because if it was too far to walk, that was our 2nd choice of transportation) and headed to another mall. Here we are in the subway. 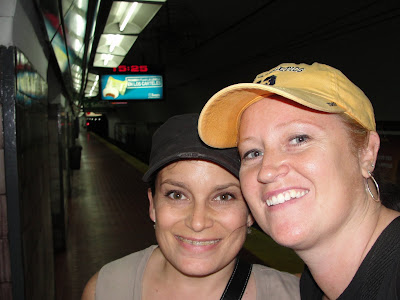 That night we got all gussied up and headed for supper and then to a tango show. 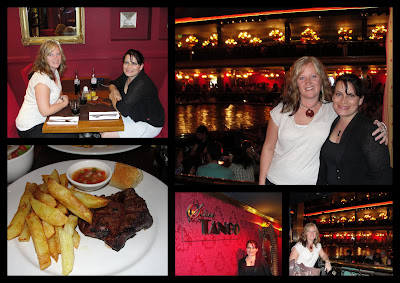 The tango show was awesome. At first it started out with a lot of great dancing and then the owner came out and started talking ... in Spanish ... and talking ... and talking. I had been told that the show was an hour and a half, so after he'd been speaking in Spanish for half an hour, I was getting a little bored and ticked that this guy was speaking in a language I couldn't understand when I wanted to see more dancing! Leana was being great and trying to interpret as much as she could, but he just kept going on and on. Finally, when he was turning in our direction, I purposely put my head against the pillar beside me and looked away as if to look bored. I thought maybe it would click in his head that most people here would be tourists and possibly not speak Spanish. Well, it clicked in his head, but instead of getting on with the show, he STOPPED the show and started speaking DIRECTLY TO ME! He looked right at me and said, "Do you not speak Spanish?" I didn't think he was speaking to me so I just kind of stared back at him and finally said, "Me?" He went on to dim the house lights and put just a spot light on me and proceeded to chat with me for what felt like FOREVER. He asked where I was from, told me to move my chair closer, "No, even closer" and then asked if he could sing to me (which ended up just being "la, la, la" but it was pretty embarrassing none the less.

Finally, they got back to the dancing ... 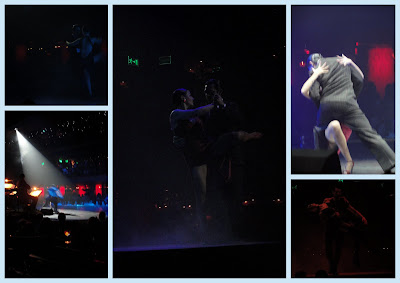 which was amazing. The pictures are pretty dark because we weren't supposed to be taking pictures so I didn't use my flash. They recreated the scene from Moulin Rouge where they danced and sang "Roxanne" and then sang, "Don't Cry For Me, Argenti.na." I'm going to try to upload that video now.
Posted by Fiona at 12:03 PM

Why, WHY are there no pictures of you in your embarrassing situation? I simply cannot imagine you being embarrassed by anything.

I would have been MORTIFIED!
Loving the Argentinian travel update!

Great, great memories. It seems so long ago already.
Lea