Since I arrived in Penang a day "early" I was able to catch all but one of the kids Christmas school activities (actually, we still have another play of Jackson's tomorrow, too). This was Ashtyn (obviously not posing nicely for the picture) and Sydney before their band concerts. I thought they looked so nice all dressed up. Syd hates her Thai outfit, but I think it's beautiful and she wears it so well. 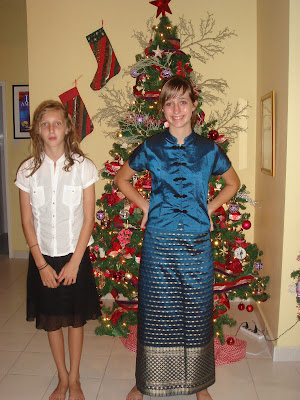 Ashtyn's band played many Christmas songs and they did very well. I heard her practicing at home last night as well and for this being her first year, she sounds great. I knew what every song was that she was playing. :) 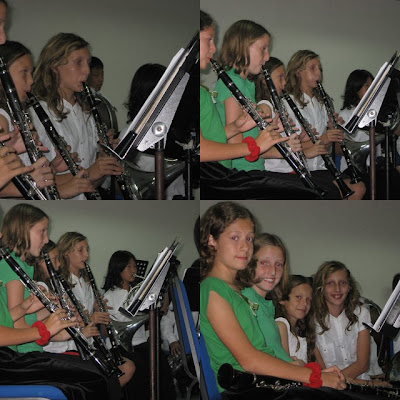 Sydney's been in band for 3 years I think, so their class played a few harder pieces. Her conductor said that one of their songs was the 2nd hardest piece he's ever conducted. I do have video of both girls playing (as any proud Aunt should), but I'll save those to show to my parents separately. :) Psst - see the guy behind Syd in this first picture? He's got a HUGE crush on her, but she says he's too stalkerish. hee hee 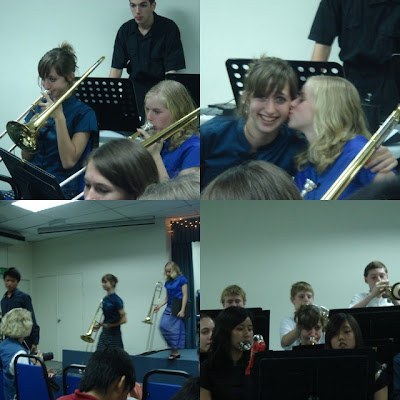 And then Jackson's class was in charge of the elementary school chapel one day and they did the Max Lucado (I think) story about the sheep that all the other sheep made fun of but his friend, the cow, always told him he was special and he ended up keeping baby Jesus warm in the manager. It was very cute. 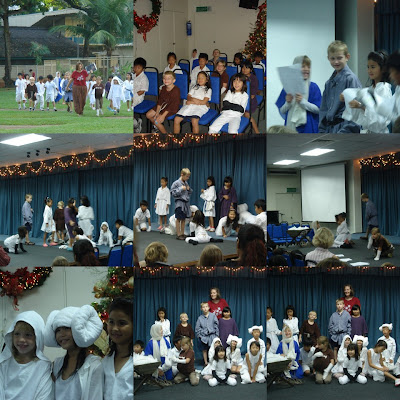 We've also just done a lot of hanging out. Here's us at Baskin Robbin's. 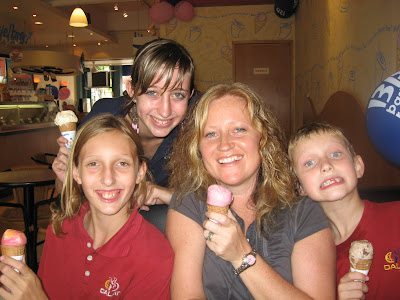 Here we are at Chili's Restaurant before going to see the movie Enchanted (which is very cute and endearing). The pink haired lady is my sister, Jodi and across from her is her friend, Tracy and her daughter, Kenya (who is Ashtyn's best friend. Ashtyn's the tallest in her class and Kenya's the shortest. They are very cute walking together). 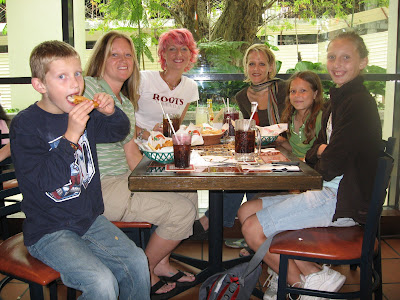 Jackson is a very loving little boy, but usually when my Dad's around, good luck getting Jack's attention. Well, since I'm here by myself, Jack and I have hit it off quite well and him and I are best of buds. Is it being a bad Aunt when you're playing so hard with your nephew that he actually pukes? Oops! Sorry, Jack. Next time we'll wait until at least an hour after supper. You'd think that puking when you're not sick would freak him out, but he got cleaned up, looked at me with a huge smile and wanted me to start chasing him again. So funny! 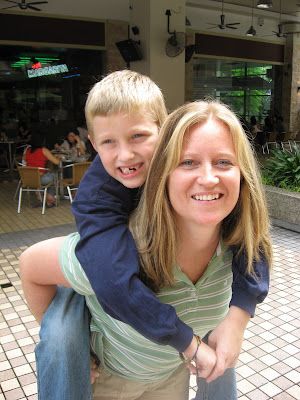 Ok, this is a nasty picture of me, but Sunday afternoon (after our quiet time), Craig, Jackson and I put together the Canada puzzle they got as a Christmas present from friends back in Canada. The pieces were nice and big so it wasn't too hard. 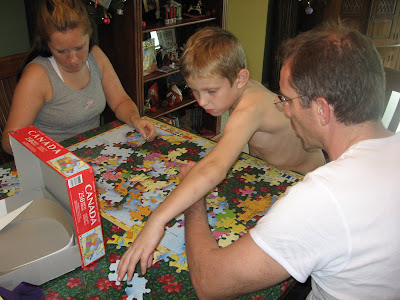 I had to put this picture in because I CANNOT believe how Sydney is growing up so fast. I literally just stop and watch her quite often because how can she be 14 1/2 already??? This picture was taken at a Christmas Banquet they had at their school before I got here, but I had to show off how beautiful she looks. The banquet was a Sadie Hawkin's event (where the girls ask the boys to go) and Syd didn't know who to ask. She has SUCH a huge heart and didn't want to hurt any of the 5 boys who like her (hee hee, so cute!), so her parents told her to ask a guy who is strictly her friend and there would be no pressure. She asked a SENIOR!!! Way to go, Syd! :) They had a lot of fun together and in this picture she's wearing his hat. Isn't she beautiful? 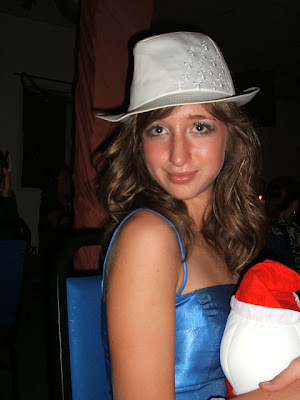 Sounds like you're keeping really busy and having lots of fun too!

I'm always checking for the updates! Keep them coming! Your nieces are beautiful and your nephew is a cutie!! Miss you!!

So fun!!! How did those kids grow up so fast. Glad you are having fun and being such a cool aunt.

Hi Fiona - Dad and I are enjoying reading your blog - it's good to see what you all are doing and you're having such a great time. This "blog" thingy is great, because we don't have to wait till you get home to hear and see what you've been up to. Have a good (safe) time in KL and have a wonderful Christmas. Looking forward to seeing you in January when we come to Abb for Laverna's wedding (Jan. 26) Bye for now - Love you all - Mom

Hey Fion,
Glad you are having such a great time!! Love checkin in to see the updates. Today I had a few moments extra so I thought I'd leave a comment so you know I really do read your blog. Have a wonderful Christmas with your family. See you next year!

Have a great Christmas with your family, Fiona. Sounds like you're having a great time. All the best.