So, here's the first leg of my trip. Picassa doesn't collage the whole picture, so my head got cut off in the first one. The first 3 are of me all packed and ready to go at the Vancouver Airport. Thanks Bren and Natasha for dropping me off. The middle 3 pics are: a picture of my plane (best airline EVER - movies galore, tons of TV shows, CDs to listen to and video games to play. I wasn't bored for a minute). It was a beautiful day for a flight as you can see from the view of the North Shore Mtns. I had really great meals on the plane (but a little weird times to eat, but I'm not complaining). This was my linguine with chicken meal. Last one in this row is from my stopover in Seoul, Korea. Took 10 1/2 hours to get there from Vancouver. Last 3 pics are just of the in flight map to show you how close to Singapore we were. 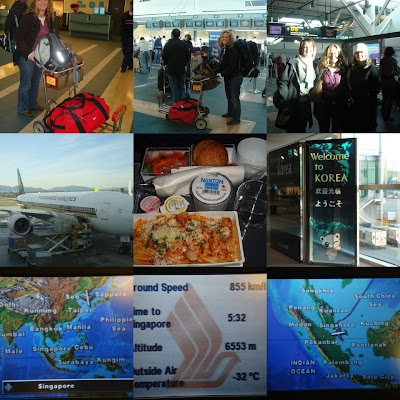 This picture is from the bathroom in Seoul. Bren had told me that when she was there, in the bathroom stalls they had a button you could push that would play music to drown out any noise you were going to make. :) Well, I thought that's what this was so I pushed the button. Instead, it played the sound of a toilet flushing REALLY LOUDLY! Of course I couldn't turn it off, so I had to wait it out and had a little chuckle. Etiquette Bell? I think not. 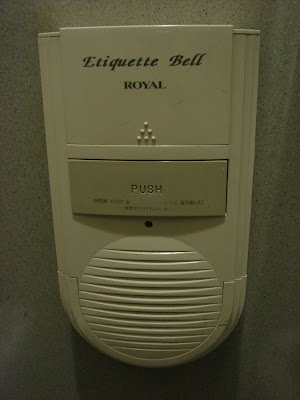 This first picture is when we were 6 minutes from landing in Singapore. Even though it was in another language, I could tell that it was 22 degrees outside ... at 11:00 pm at night! Sweet! Speaking of sweet (nice segway, hey?), the lady beside me on the plane brought these Krispy Kremes all the way from Seoul (and maybe from beyond that. I didn't ask where she was from). A lady after my own heart ... except that she didn't share. :( 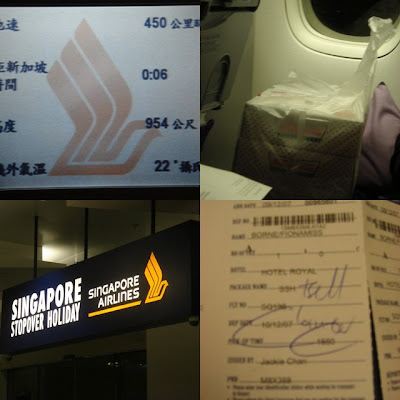 When I went to my stopover booth at the airport, guess who checked me in? I don't know if you can read the last picture above, but it was Jackie Chan! I almost said, "Your name's Jackie Chan?" but realized he probably gets that ALL the time, so I just smiled to myself, thanked him and walked away.

I had a nice sleep in my hotel, then went downstairs for breakfast. Can you believe they had a chocolate buffet for breakfast? Ok, ok, it was yummy! As I was sitting there eating, I looked up and couldn't believe my eyes. On the TV was the 2007 Grey Cup! What? I didn't even watch the Grey Cup when I was at home in Canada, and here I was watching it in Singapore. Too funny.

The rest of the day I had the privilege of hanging out with my Bible school roommate, Lisa and her daughter, Thizbe. Her hubby, Steve and son, Emmett came to say hello and then the guys parted ways as they didn't want to hang with us shoppers. :) I can't believe that 14 years ago I was standing up for them in their wedding. We had a good laugh thinking about Bible school days and if someone would've told us we'd be hanging out in Singapore, we would've thought they were crazy. God's plans can be so different than what we think they're going to be. 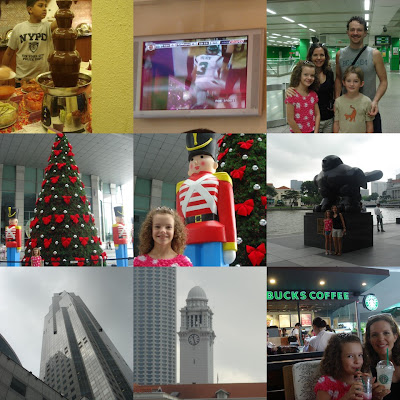 We had fun going to the touristy places and of course stopping at Starbucks for a drink. Seriously, is there anywhere that Starbucks isn't?

Then we walked through this beautiful, swanky hotel called The Fullerton Hotel. They had amazing Christmas decorations up. Even though it was hard to think Christmas was coming in the 30 degree weather, the decorations were a good reminder. 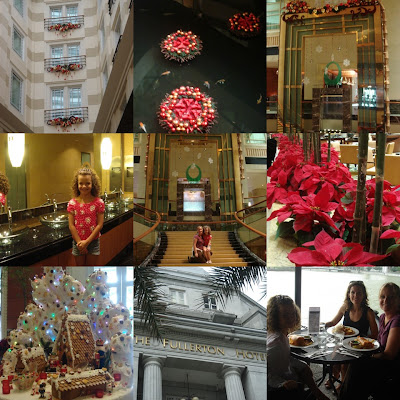 As it started to rain, we didn't even mind because it was a very warm rain, we decided to stop for lunch along the river. It was a wonderful day and hopefully I'll get to see them again on my way back home. 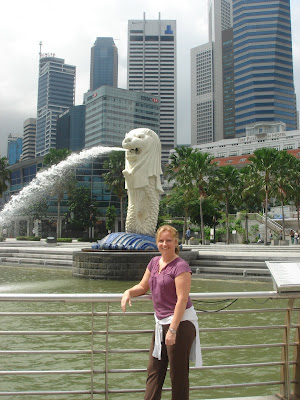 This is me in front of the famous Merlion that all the tourists get their pictures in front of. 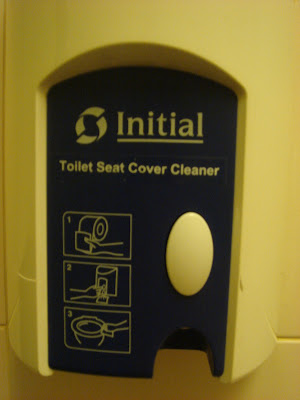 Ok, one more bathroom picture. This was in the Singapore Airport and is the most BRILLIANT idea I've seen in a bathroom yet. You wad up a bunch of TP, stick it under the slot at the bottom and press the button. Cleaner spritzes out and you can clean the toilet seat before you sit down! Isn't that great? Sometimes those toilet seats can be nasty, so I thought this was very smart.

Just over a one hour flight and I will be in Penang with my sister. Stay tuned for a funny airport pick up story. :)
Posted by Fiona at 3:54 PM

It's all so exciting! I almost feel as though I was there.

I can't believe that lady on the plane didn't share her Krispy Kremes. That's just wrong. ;)

And such warm weather you're enjoying! I felt warmer just reading about it.

I'm so glad that you're having a good time. Can't wait to hear more.

Happy travels my friend. So fun getting the play by play. Keep it up. Have a starbucks for me because Argentina is one place that Starbucks can´t be found. Unless they opened one in Buenos Aires since I have been there last but I don't think so. Argentina is the land of cafe con leche so I guess they don't think they need Starbucks. Love you friend.