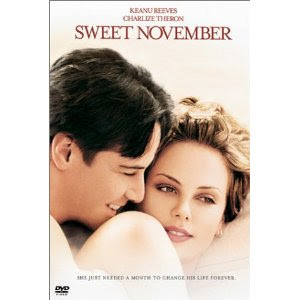 This ... was a terrible movie. There, I said it. If you liked it, I'm sorry. We can agree to disagree, right?

From about 3 minutes in, I knew this was going to be a painful 2 hours ... yet, I continued to watch. I don't know why. I can't explain it, but even if I'm reading a not so great book, I have to finish it. I'm the same way with movies. I guess I always have a little hope that it'll get better. Oh, sorry. I guess I should give you the synopsis of the movie so you know a little of what it's about.

Nelson (Keanu Reeves) is a man devoted to his advertising career in San Francisco. One day, while taking a driving test at the DMV, he meets Sara (Charlize Theron). She is very different from the other women in his life. Nelson causes her to miss out on taking the test and later that day she tracks him down. One thing leads to another and Nelson ends up living with her through a November that will change his life forever.

So, my problem with the movie wasn't so much about the storyline (although I'll get to that in a minute), but the acting. It was HORRIBLE!!! I never expect much from Keanu (sorry, I know he's Canadian). I mean, I liked him in Bill and Ted's Excellent Adventure and also in The Matrix, but in B&TEA, he was a goofball and he pulled it off. To me, it didn't really look like acting. It looked like that's how he really talks ... and to me (can you tell I'm trying to get across that this is just my humble opinion), I've seen a little of Ted in all his performances since then. In The Matrix, it worked for his character to be very monotone and I really did like that movie. Oh, I also really liked Point Break, but I think the storyline and Patrick Swayze carried him through that one. Plus, it was about surfing, so he could bring that goofball thing into it again and it worked:
Johnny Utah: You're sayin' the FBI's gonna pay me to learn to surf?

Johnny Utah: Vaya con Dios, Brah.
Hmmm, am I sensing a little Ted in there yet again?

Anyway, that's Keanu. Now, about Charlize. As I was watching the first few minutes, I thought, "This must have been one of her first movies. This is awful!" So, I went to my trusty IMDB and looked it up. I was surprised to see that this movie came out after The Legend of Bagger Vance, The Cider House Rules and Men of Honor ... movies in which I'd liked her.

It must have been the script, then. The whole thing is too forced and unrealistic ... to me. I don't want to give too much away in case, in spite of my warnings, you still see it (luckily this is an old movie so most likely you won't CHOOSE to rent this one). Yes, it's explained later on why she acts the way she acts, but really? Ugh. I don't even really want to spend too much more of my time on this movie, so I'll try to end on something positive. Yes, there were a few sweet moments, but I think the best things about this movie were the kid who played Abner (Liam Aiken - he's also in Lemony Snicket, Road to Perdition and Stepmom - SUPER cute kid ... who's now 20) and the guy who played Chaz, Sara's friend from downstairs (Jason Isaacs - he also plays Lucius Malfoy in the Harry Potter movies - I knew he looked familiar while I was watching this dreaded, err, uhm ... movie).

Again, sorry if you liked it. This is just my humble opinion ... and it is my blog, after all. ;)

I saw this movie eons ago and can't really remember much about it. That's proof right there that it sucked. (I always remember movies that I loved.)

Speaking of Bill & Ted's, we just watched that on Saturday night with our kids. They LOVED it! I had forgotten how funny it was. I really like Keanu even though I must agree with you that I frequently see the Ted coming out in his performances. I loved him in The Lake House. Have you seen that one?

Yeah, I've seen The Lake House. Liked it ... didn't love it. My favorite with him is still The Matrix.