Well, since I had the inside scoop (yeah, I wish!), I was correct on the big 5 awards from The Oscar's last night in my Movie Monday post from a couple of weeks ago, so instead, I'll show you how I decided to dress for the "party" I went to. 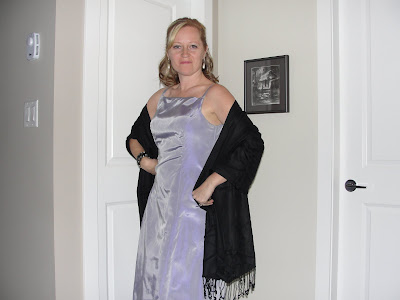 We were supposed to have Care Group that night but when I told everyone that it was Oscar night, we decided to just get together and watch the Oscar's ... and I decided to have a little fun. 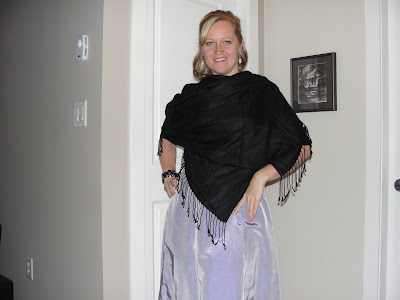 I'd thought of the idea a couple of weeks ago and told someone at work and they thought it was funny ... as did I ... until I was fully dressed and leaving for the party ... then I started feeling silly (as proven by this last silly pose). In case you were wondering, I'm wearing "Giorgio" Fairweather circa 2002. 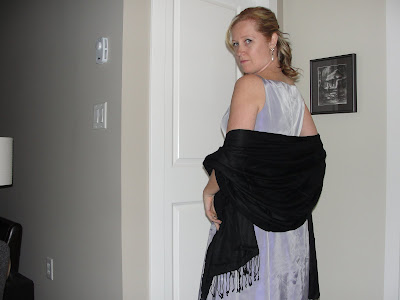 I walked in with my head held high (even though I felt like slipping into the bathroom and changing before anyone saw me) and we all had a good laugh. Heck, how else am I going to put one of the 12 bridesmaid/maid of honour dresses to good use?!

Anyway, since the Oscar's were quite boring other than the opening number, I'll review another movie I saw on the weekend. Rabbit Hole: 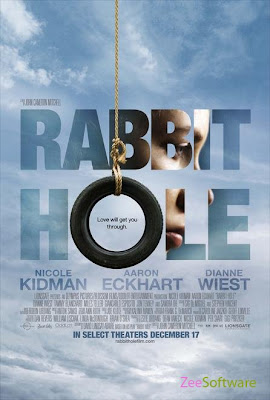 Nicole Kidman and Aaron Eckhart play ordinary people mourning the accidental death of their 4-year old son in the searing new drama “Rabbit Hole”. Kidman and Eckhart must find a way to navigate the many potholes and detours on the long journey back to intimacy after such a tragic hole is ripped right through their seemingly perfect lives.

I'd say that overall I did like the movie, although it was a bit slow at times. Nicole Kidman was nominated last night for her role in this movie, but I didn't think it was that good. My friend and I both heard her accent come through at different times, too. One of the reasons this movie got to me was because my family has dealt with the loss of a child. It happened before I was born and honestly, sometimes I forget that my parents went through that horrible incident, but seeing a movie like this made me think about it from their perspective. I won't give away the ending, but I will say that it was interesting to see how each of them dealt with their grief so differently ... sometimes working together and sometimes not.

After watching this movie, I want to take this time to commend my parents for not letting the death of my brother destroy their marriage. Blame could have been cast, but it wasn't. Their grief could have destroyed them, but they didn't let it. They dealt with it as best they could at the time. In the movie, both Nicole Kidman's character and her mother have lost children and she says to her Mom, "When does it go away?" and her Mom says, "Never. But it gets easier." That really hit me when thinking about my own parents. Like I said before, it happened before I was born so I don't think about it every day, but I'm sure it's never far from my parents minds. We do talk about my brother and I've seen pictures and man, was he a cutie! I often wonder how we'll know each other when I get to Heaven and will he still be a little boy or not, but what matters is that I'll get to meet him one day.