My friend Jennie and her kids asked me to go with them to the Canucks Super Skills on Sunday. Although Jennie had a hard time with the fact that Bertuzzi was not going to be there, she made it through somehow. :) It was great to watch the speed skating, puck handling, 3 on 1 and also watching the little kids play with the big boys. It must have been so nerve wracking for those little kids to receive passes from Naslund, Linden, Salo and the Sedin twins. I was a little sad that Morrison wasn't there, but hey, have you seen some of the new guys? Hello Willie Mitchell, Taylor Pyatt, and Kevin Bieksa (my new fav because he's #3, although he might not be new, but whatever)!!! Yes, I was there to watch the "skills," but how could I not appreciate the beauty that God made? They're all at least 5 years younger than me you say? Again, just appreciating ... is that a crime? :) A guy I went to High School with MC'd the event ... Dan Murphy. He's an actual sportcaster for Sportsnet, so it's probably not a big deal to him, but it was cool for me to see him "working." What a great job! Thanks Jennie and kids for taking me. I had a GREAT day! 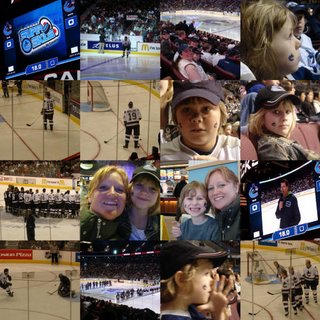