When people ask me to pick a highlight of our trip, it's hard to do, but Ephesus usually is the first thing to pop into my mind. Although Jerusalem and Bethlehem were cool because I've read so much about them in the Bible, Ephesus was more intact as it had been back in the day, so you didn't have to use your imagination as much to try to figure out what it might have looked like. Our guide told us that the town is only 20% uncovered, which is crazy to me because there's so much to see. 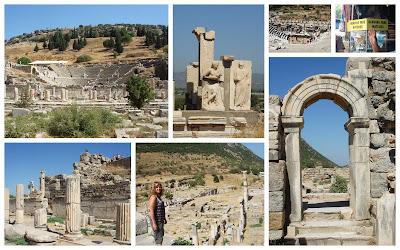 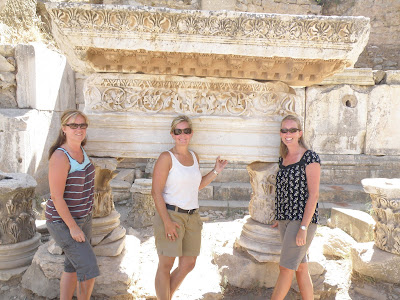 Paul and the Apostle John spent much time in Ephesus (Acts 18:19–21, 1 Cor 16:8-9). It is thought that Paul wrote the book of Ephesians in the Bible to the people of Ephesus during his imprisonment in Rome. 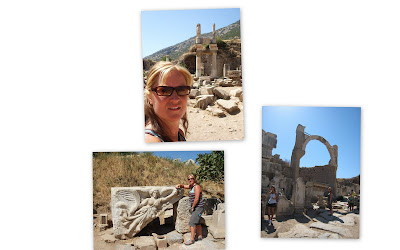 Can't you just picture Paul walking down this road in his sandals and toga type garment? 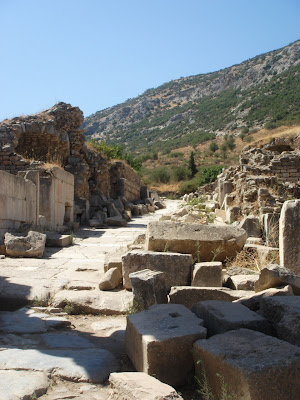 It was so surreal to be here. I loved every minute of it, even though it was CRAZY hot that day. Whenever our guide stopped to tell us something, he tried to stop in the shade but it didn't always happen. I had a bottle of frozen water in one pocket of my shorts and was sparingly drinking from the other bottle.
When we came around the corner and saw the street in picture #2 below, I literally stood there and was like, "Wow. This is amazing." I don't know if you can click on it and make it bigger, but it really was quite impressive. 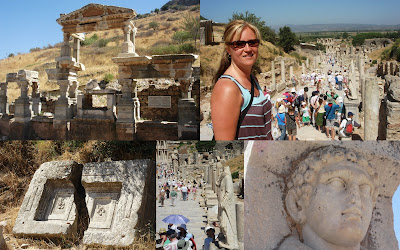 The carvings they did back then were beautiful. 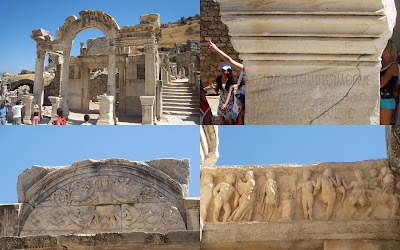 Picture #2 below is a toilet. There was a whole row of these holes in this slab and apparently when an important person had to "go" they had one of their servants come and sit on the spot for awhile to warm it up. There were no partitions, so out the window with any privacy issues. 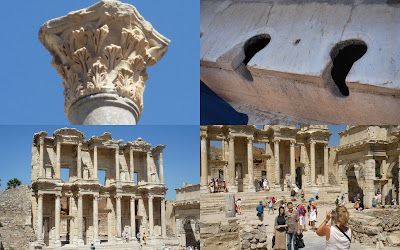 Picture #3 above is of the library. This was at the end of the street in the pictures above which is why that street really took my breath away. Picture #4 shows that we could take up a second career if we wanted to. All 3 of us were constantly asking or being asked by other people to take their picture. It's no fun if you only have pics of the other person you're travelling with and never any of you together, so we were happy to take them. 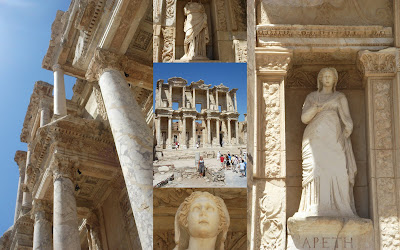 After the library, you come around the corner to another amazing site. The Great Theatre seats approximately 44,000 people. 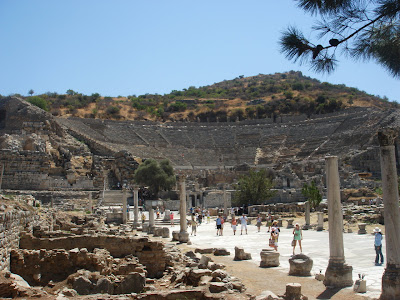 You can read about this theatre in Acts 19:29 during the riot in Ephesus. Picture #4 below is Harbour Road. Ephesus used to be a port town but now the ocean is 7 km away! 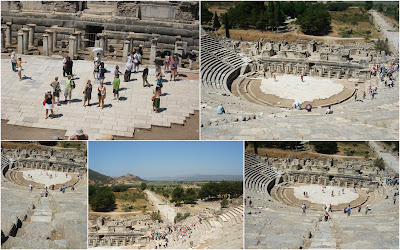 I just love this picture of Bren sitting alone in the theatre. 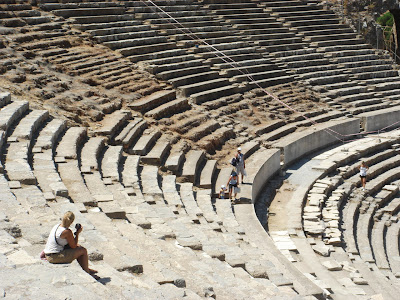 Our tour guide told us that U2 have performed here, but I'm not too sure about that. :) 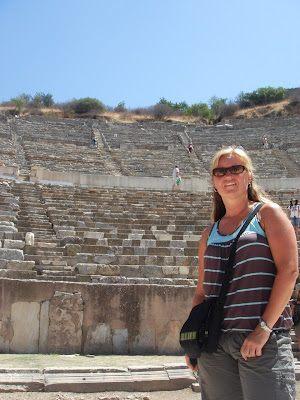 After our tour of Ephesus, they took us up this hill where Mary supposedly spent her last days. There's a wishing wall there where you can write your wishes on a piece of paper and fold them up and stick them in the wall. Not sure how that's supposed to work ... didn't try it ... but there are also 3 wells there. 1 well for health, 1 well for wealth and 1 well for love. The waters in these wells are supposed to be miraculous if you drink them. We were a little leery of drinking the water so we splashed a little of the "love water" on our arms and hoped for the best. :) 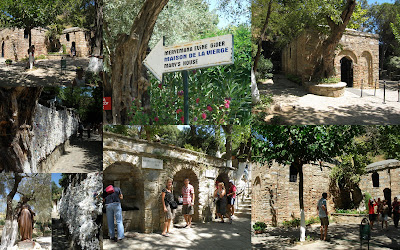 After this we went to a little village called Sirince where they make wine and olive oil. 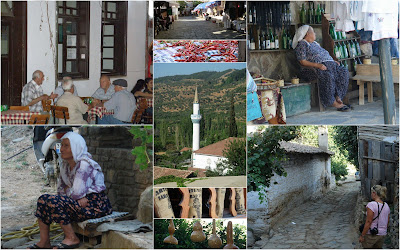 I'm so glad you took the time to catch up! Great memories!

AMAZING!!!
It can't be true about U2 because you would have been there... and had your picture taken with them :)