After a 13 hour overnight bus ride from hell, we landed in this beautiful paradise called Kuşadası . At first our bus driver took us to this hotel waaaaay up on the hill and we said, "No, no. We specifically asked for a beach side hotel." Eventually we got things sorted out and stayed at the Sozer Hotel (pic #1 below). We may be girls, but we're not going to let ourselves get walked all over. Our first night was spent watching the beautiful sunset. 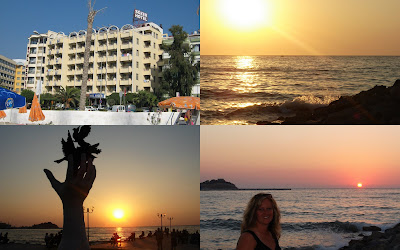 Picture #1 above was taken while standing on the beach in the pictures below. It was so nice and close. The dude in the picture below ran the beach and rented our chairs and umbrellas to us every day. He was Turkish and was married to a very nice woman from Holland. Karen and I kind of thought he looked like George Clooney ... I said kind of ... with his glasses on. Not when he took them off. Bren didn't see it at all. The little dude in the picture below was his helper and would run across the street and get pretty much anything you wanted because you felt too lazy to get up yourself. We had a great, relaxing time on this beach. Thanks Tafik and your little buddy! 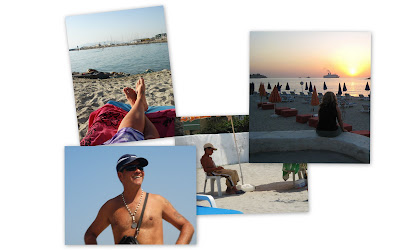 After a day of relaxing on the beach we were off site seeing again. We took a 3 hour bus ride inland to Pamukkale. It may look like a glacier of ice, but really it's limestone. It would take me too long to explain how this happened, but if you're interested click here to find out more. 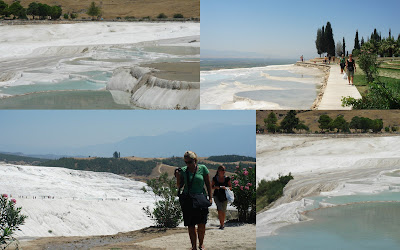 It was quite pretty, but I'm not totally sure if it's worth the 3 hour bus ride. The pool in the middle of the picture below is supposed to have healing powers. One of our trio (who shall remain unnamed) was having a few stomach issues and did not feel any different after swimming in the healing pools. So much for that! :)

This will be a short entry because the next tourist attraction we went to deserves it's own entry. One of my favorite stops on the trip, coming up!
Posted by Fiona at 10:28 AM

I know that you will find this hard to believe, but I think I would put Pamukkale over Ephesus.... I know... shocking! It was definitely a long drive and no, the healing waters did not help the unnamed member of the trio, but I found the whole thing so awe-inspiring because it was God-made. One of my trip highlights for sure!

Wow. I didn't know that you enjoyed it that much. I love that we all have different tastes. Made the trip more enjoyable to see it through others eyes and see something I may have missed.