If you know me at all, you know that I LOVE movies. I’ve seen 2 really good ones lately that I thought I would recommend.

First is The Curious Case of Benjamin Button (and NOT because Brad Pitt is in it). 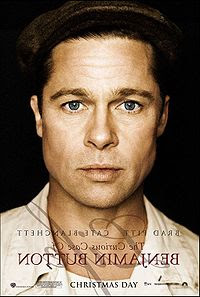 Over the Christmas Holidays I saw 3 movies. Bedtime Stories (with Adam Sandler which was cute and I saw with my niece and nephew), Marley and Me (I had read the book so I was aware to bring many Kleenex along) and The Curious Case of Benjamin Button. Of the 3, I am recommending this one because it’s something different. The idea of someone aging backwards is new to me in the form of a movie and ties a great storyline and some good acting in along with it. It is 3 hours long and there’s a part in the middle that kind of bored me a bit and I didn’t think really needed to be there, but all in all it was quite good.

The 2nd movie I would recommend and would even say is one you SHOULDN’T miss in the theatre is Slumdog Millionaire. 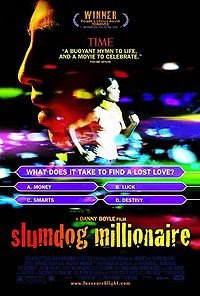 There’s something to be said about really great unknown actors to help a movie be great, because it’s easier to believe the story rather than thinking, “Oh, that’s just Brad Pitt playing a character.” Since I didn’t know these actors, I could really get into believing that they were really these characters and this story was really about them. I didn’t know much about this movie before I saw it other than a kid from the Slums goes on Who Wants to be a Millionaire. This story is heartbreaking and inspiring and yes, there is a love story attached to it that is very sweet. I definitely hope it wins Best Picture at the Oscar’s this year.

One movie I wouldn’t recommend (especially to married people) is Revolutionary Road. While Leonardo DiCaprio and Kate Winslet both pulled out amazing performances, if I was married, this movie would’ve played with my head. It’s a story about a couple who everyone thinks has the perfect marriage, but when you take a closer look, it’s falling apart. They think by changing their location that it will solve all of their problems, but in the end, it showed me that you can’t deal with issues that deep with just a simple bandaid. You’d really have to delve into how the issues got there in the first place. I’m not one that’s blinded to the fact that marriage takes a lot of hard work … it would just scare me if both parties aren’t ready for the work and communication it would take.

So there you have it. Of the other Oscar nominated movies, I’m planning on seeing The Wrestler in the next week or so, I haven’t seen The Reader or Tropic Thunder but would like to, but I don’t have a huge desire to see Milk or The Changeling. Oh, I did see Doubt as well and really liked that one, too. I’m a huge Philip Seymour Hoffman fan and he was great in this one as was Meryl Streep (MUCH improved from Mamma Mia – I’m sorry, I know there are a lot of you out there that like that one – it was too cheesy for me, but I did love that it was set in Greece seeing as I was there this summer). Australia is up for Best Costume design and I think it’s the new Gone With the Wind. I really liked that one as well … leaning more towards Chick Flick, though.

Hope you enjoyed my reviews. I guess that turned out to be more than 2 recommendations. The Oscar’s are on Feb. 22 in case you were wondering. :)
Posted by Fiona at 12:15 AM

Love having you for reviews. Since most of our movies get here at least a month after you guys it helps me to pick. Love you friend. Wish I could watch the Oscars with you.
Leana

I liked Benjamin Button although it could have been at least a half hour shorter.

As for Slumdog... I don't know how I feel. It was such a dark movie. I didn't know what to expect. It was one of those movies that just leaves you sitting quiet at the end. Well written, I thought it was a true story!

Can can you please review I 'lighter' movie next?? I have never been a movie person but I think I might be changing :)

Did you see Gran Torino??

yeah, i saw gran torino as well and thought it was really good. at first i thought the kids were really bad actors, but after awhile it made it more real for me ... like they were just being themselves and not acting. dare i say i'm not a huge clint eastwood fan ... but he was quite good as well.